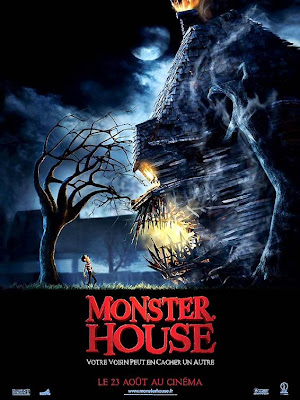 Monster House symbolizes Chirotic wounding. I know this idea probably sounds crazy, but I think it links in powerfully with Chiron’s journey. In the beginning of the movie we see JD spying on a house and a man named Nebbercracker. The old man lives here and terrifies the local children if they come near his property. The story at first appears to be about a crazy man who shouts at the neighbourhood kids. JD crosses paths with Nebbercracker after going up his garden path for a basketball. Nebbercraker begins screaming at JD and suffers from a stroke, and appears to drop down dead. When Nebbercracker is taken away by the parmedics he drops a Skeleton Key to the floor. I am obsessed with skeleton keys in relation to Chiron and the theory of unlocking our deepest wounds.  The moment the skeleton key falls to the ground in the movie, something is urging us to explore the wounded house. It is by opening this gateway that DJ and his friends unlock years of torment and rage that is hidden behind those doors.

Near the end of the movie Mr. Nebbercracker returns and reveals his story to JD. He met an overweight woman, Constance, at a circus freak show, and fell in love with her at first sight. After helping her escape from the circus, Mr. Nebbercracker moved them away and started building a house for them to share. Children taunted and threw things at Constance, and on one particular Halloween day, the children began to cruelly attack her with eggs and tomatoes. Constance went after them, lost her footing, and fell from the edge of the house’s foundation, as she grabbed the lever of a cement mixer to save her from tumbling, it covered her in cement and buried her in the house.

Mr. Nebbercracker ended up finishing the house despite Constance’s death, but found that her spirit had not left. Mr. Nebbercracker has since gone to every possible measure to keep the people away from his house and Constance’s wrath, thus resulting in his child-hating reputation. Mr. Nebbercracker felt that it was now time to destroy the house. The house overhears this, and is angered. Constance breaks free from her foundation (growing 4 tree parts as legs) to attack the group.

Here are some Chirotic Themes

Supernatural
Astrology -The Red Pill: The Saturn-Uranus Dilemma
Friday's Film Round-up: The Lovely Bones
Too Close for Comfort
QUESTION: A Transit of Chiron, How Does it manifest?
Pluto in Capricorn: Vampire Status