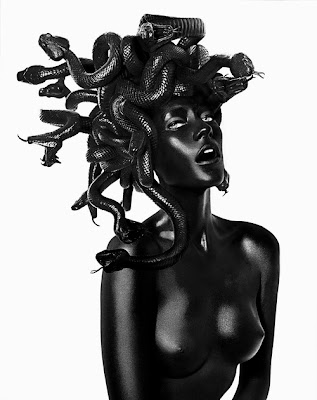 The Full Moon in Scorpio symbolizes a time when our feelings flare up and are angry, resentful, jealous. The Moon here is in the sign of hidden emotions and has a powerful connection to the creature Medusa.

In myth she was a gorgon monster and if you gazed into her eyes you would turn to stone. The penetrating gaze, vengeful emotions and destructive feelings are familiar in the life of a Scorpio. The only way to slay Medusa was to not look at her directly, but with the aid of a mirror.

When the Full Moon occurs in Scorpio we should use this period as a time for reflection.

There are a number of gorgon legends in folklore. The commonest is that the gorgon was once a very beautiful woman. Some goddess is jealous of her, or some injury is done to her. Sometimes this is rape. The rape and violation of this woman spawn a sense of terrible outrage and a need to avenge the violation…She always has her tongue stuck out in a very phallic way, and there are generally snakes around. Sometimes her hair is made of snakes, as in the case of the Greek Medusa. Sometimes she has two snakes wrapped around each arm. She has very large staring eyes, and her gaze paralyses. She is an image of outraged, violated nature. I think it is difficult for a woman to actually recognise when the gorgon appears, because she simply falls into her, becomes her. Men spot it instantaneously. She has a characteristic voice, which is one of injured dignity and outrage. Her surface complaint may be typical, “How could you have hurt me?” or, “If you really loved me you wouldn’t have done that.” Underneath there is a deep ancient bitterness. It is the ancient bitterness of women feeling used, humiliated, trodden upon. This is a collective image, a very old experience, but a small personal hurt can plunge you into this voice that speaks with the pain of millions of years. By Liz Greene

The emotions of a Scorpio Moon, Moon in 8th house, and Moon-Pluto aspects frequently come across as vengeful, resentful or turbulent at times. The issues faced appear to stretch back into the family history and there is an acute receptiveness (Moon) to all that is hidden in the family psyche. The dark Moon deals with monstrous emotions and feeling humiliated and betrayed.

When the Full Moon is in Scorpio it will tend to emphasise raw emotions, and issues around dominance, control, possessiveness and vengeance. It also represents the power of healing and transformation, but emotions will still feel intense around this period.

Full Moon in the 8th House
Moon Phases 2015
The Full Moon in Scorpio - Murder, Rape, and Exposure
Moon in Cancer