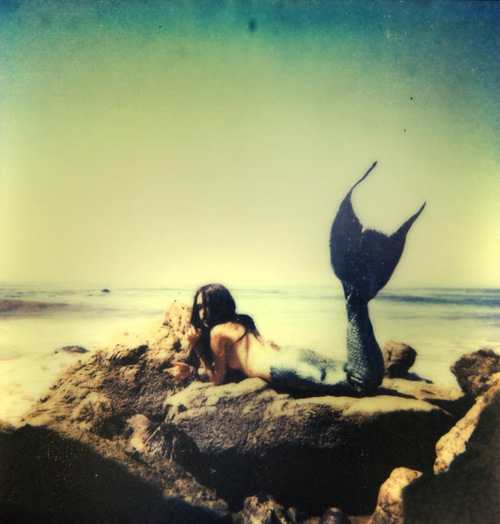 The Pisces archetype is associated with the image of the great mother, and her nourishing, protective womb represents the sea as a source of all life.

The sign of Pisces is the classic image of redemption and universal love, and its symbol – represented by two fish swimming in a circular motion, signifies entering into the unknown and mysterious realm of the ocean — leading us to the completed cycle of life. In the myths surrounding the bond between child and mother it often depicts the smaller fish releasing himself/herself from the larger fish to claim his/her personal identity. All Piscean/Neptunian/12th house themes represent fusion, but this also means difficulty in defining a clear and separate individuality.

When the Moon is related to Pisces/Neptune/12th house, mother is an all-giving, all-sacrificing, all-loving, feeling, redeeming, selfless and devoted figure. On the one hand, she is creative and loving, but she is also changeable, turbulent and destructive.  Neptune symbolizes a mother who is lacking in boundaries and points to an identity that may not be sufficiently formed. There is a need to fuse emotionally and a very deep unconscious union between mother and child. Both are wrapped up inside of each other by feelings of guilt, responsibility and emotional unity. Images of victimization make the moon-sea child extremely sympathetic, and it may be very difficult to find individual self-expression. The fairy-tale of “Sleeping Beauty” is linked to Neptune themes in the chart. This much-loved story represents the awakening of a young female to her own identity and sexuality. Often Neptune individuals are emotive, sensitive, feminine and psychic to their very core. Sleeping Beauties, however, don’t like to wake up to reality, and the self, tends to dissolve in all relationships and through enforced passivity, they cut off from autonomy, self-actualization, and independence.

The 12th house in astrology represents the time of our gestation during which time we begin our development. The child’s total dependence on the mother at birth describes a state where nothing individual is expressed.

”The main thing to note about the womb experience is that we are more or less immersed in a primal paradise. What the Jungians call “unroboric wholeness” —there is no separation—- it’s pre-time and pre-boundaries. This is why we associate it with boundless and formless Neptune. The womb is a kind of Eden. However, it appears that some wombs are five star wombs, while others are four star, three star, two star, etc. In the womb we register things via the mother. This is called “the umbilical effect” and the nature of what passes through the umbilical to the child is probably shown by what is in the 12th house…Anything in the 12th house is very deeply buried and free floating. Birth really means taking on a body and it heralds the beginning of life as a separate individual. The body is a boundary which distinguishes us from others. Actually from the first six to nine months after birth were don’t really “twig” that we are a separate entity. “ The Development of Personality: Seminars in Psychological Astrology (Seminars in Psychological Astrology ; V. 1)

The twelfth house is associated with our biological history, as well as the residue of all our ancestors. Gestation is the collective unconscious of which Jung stated contained an inheritance belonging to all man and representing the creative potential of the unconscious mind. It is believed that throughout our incubation in mother’s womb she is extremely sensitive to all people and situations around her. Studies have found that prenatal experiences can go on to influence the individual far into adulthood, even though we have no memory of this time. These origins of influences greatly affect those with planets in the 12th house. Throughout pregnancy there is a psychic and hidden connection between mother and child, moving us with a quietness and beauty. The primal water of the womb signifies energies which are usually withdrawn, silenced, and unseen.

At conception, we begin the journey of being drawn into form, and thereby separated from our original Source which is ever un-manifest. Birth is the delivery out of undifferentiated unity. We call this differentiated form our “physical body”. It is meant to be the “house” or “temple” for that part of us that carries the memory, in fact is still connected to Unity. We call this aspect of our being “Spirit” or Higher Self. Beyond that, there remains the Divine Source from which all things come.  By Steven Forrest