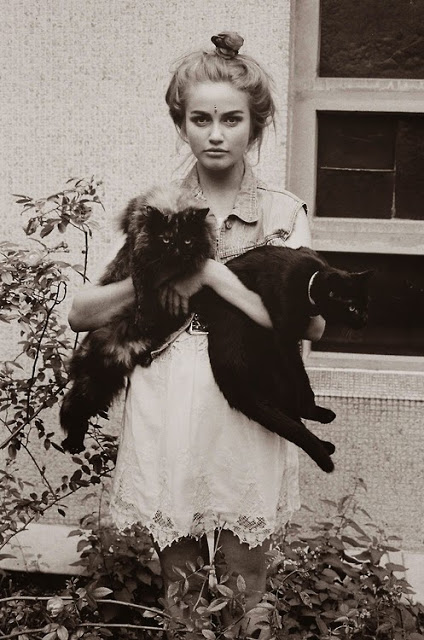 The individual with Saturn in the 9th house is looking for something beyond the border for real meaning in their lives. The major obstacle to finding their vision is Saturn’s tendency to doubt everything, and they may have an extremely rigid view and idea about life. There could be a literal fear of travelling, or even of further learning opportunities in life.  At particular points in their lives, they have lost faith, hope and belief and have learned to mistrust everything that can’t be explained.

Underlying their disbelief is a fear of believing in a larger whole at work and there is often an oppressing figure or system working in the background.  A lot of this might be because the individual has grown up in a household with strict morals, religion or beliefs that have felt restraining. Perhaps it was the grandparents who had such a strict view, and the individual was denied a real education on life.

The individual is looking for a clearer view with less superficiality, over jubilant faith and a more realistic understanding of the world. They may have a strong sense of consciousnesses about doing the right thing, fearing punishment. Often there is a need to try to loosen up a bit and allow new thoughts, visions, and experiences of higher planes enter into their learning environment. One of the big factors that stop them from exploring what is out there is the feeling of guilt instilled in them at a young age and one that has stopped them from growing up with their own constructed thoughts. The heavier expression of this placement can act itself through a person who doesn’t believe in anything and who simply lacks hope, and if they do see a God they might see him as strict and harsh.

With Saturn in the 9th house, they usually need an orthodox religion to make them feel safe and secure. The individual tends to stick with things that have been proven over throughout time. They shy away from new visions of the world dreamt up last week and need something that has at least accrued some substance.  A person with Saturn placed in this house do often find themselves in a role of authority and one that has been attained with both effort and plenty of discipline in the areas of teaching, law, publishing, religion, or further studies.

They gain status and professional advancement and want to master subjects by spending time on wider interests and through possessing a heavy and concentrated mind. It may be the mark of the student who needs every certificate and is the over-achiever of all things ninth house. They often like studies in psychology, philosophy and religion as if they are trying to find something that will rebuild that early loss of faith and need to know if there is really something more out there than what some people have dictated. They also need to stand alone when searching for what they believe without the help of organizations, authority figures, advisers and teachers.

The individual with Saturn here may find that throughout life many teachers, authority figures and guru type people have significantly let them down. This is because the answers have to be found alone, and not looked for in others. The symbol of God is perhaps another letdown, especially when good people suffer and the bad go unpunished.  Much of their life may feel as if it is a test of faith and heavy trials often show up in places that involve religion, higher education, law, and foreign affairs. When it comes to good old-fashioned faith, everything must be experienced directly by the individual to be really believed and counted on. I don’t think they want to be a Scrooge about every new faith, fad and religion, but they need to experience whatever meaning is out there in a concrete way. They don’t need someone’s second opinion, or to rely on blind faith, and even hope.

The beaten down type of individual who is depressed and feels sucked dry of any belief may reach a painful point of desperation and believe in anything as long as it will give them some faith back in life. The person searches for the meaning of life, and the significance of existence. With Saturn in the 9th house, they tend to think things through carefully, almost examining everything with a clearly defined pattern of reasoning. Within this human being is an inner fight between what understandings of life were set out early and what they are learning right now.

Naturally, whenever Saturn is involved, there will be disillusionment and disappointments along the way and things will test their values and morals. They also may not be open-handed straight away with anything foreign or unorthodox. These kinds of views have been passed down from the family who may have had nothing good to say about immigrants, people of a different culture and background. A reserved or fearful approach was taken to anything new that entered the family’s world vision. However, things change rapidly over time and the individual will examine these earlier views. When they meet with other people as a grown-up they will determine what is right and true to believe. The individual will create a new understanding of the world and a learned wisdom that contains all the facts.