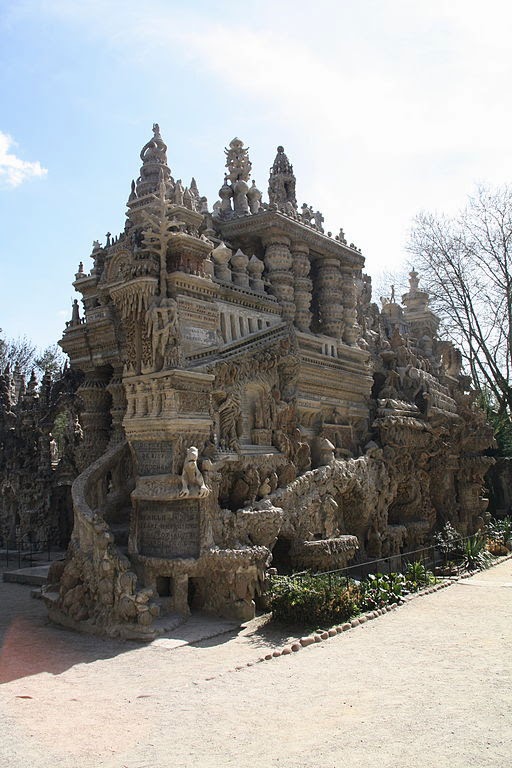 Every once in a while you come across a chart that beautifully articulates the essence of an aspect, and literal expression. In this case it is more of a T-square that involves Sun opposite Saturn both square Neptune (see chart at the end of this post). Ferdinand Cheval was a French postman that spent 33 years building his ‘dream castle’. He said he tripped over a stone that had a special form and it sparked his ambitious fantasy of making his vision a reality. People in the village thought he was fool and criticized his efforts, but he persisted and gained praise with artists expressing their sincere admiration for Cheval. The palace is open for visitors, and is an amazing sight to see knowing the persistence of one postman armed with a dream and a stone.

Cheval began the building in April 1879. He reports: “I was walking very fast when my foot caught on something that sent me stumbling a few meters away, I wanted to know the cause. In a dream I had built a palace, a castle or caves, I cannot express it well… I told no one about it for fear of being ridiculed and I felt ridiculous myself. Then fifteen years later, when I had almost forgotten my dream, when I wasn’t thinking of it at all, my foot reminded me of it. My foot tripped on a stone that almost made me fall. I wanted to know what it was… It was a stone of such a strange shape that I put it in my pocket to admire it at my ease. The next day, I went back to the same place. I found more stones, even more beautiful, I gathered them together on the spot and was overcome with delight… It’s a sandstone shaped by water and hardened by the power of time. It becomes as hard as pebbles. It represents a sculpture so strange that it is impossible for man to imitate, it represents any kind of animal, any kind of caricature.”

“I said to myself: since Nature is willing to do the sculpture, I will do the masonry and the architecture” For the next thirty-three years, Cheval picked up stones during his daily mail round and carried them home to build the Palais idéal. He spent the first twenty years building the outer walls. At first, he carried the stones in his pockets, then switched to a basket. Eventually, he used a wheelbarrow. He often worked at night, by the light of an oil lamp. The Palais is a mix of different styles with inspirations from Christianity to Hinduism. Cheval bound the stones together with lime, mortar and cement.

Saturn in astrology is the planet of time, and rules all natural man-made structures ruling over discipline, hard-work, organizational talents, patience, successful ambition, reliability and responsibility. With Saturn’s achievement we usually have to sacrifice our time, labour and effort. The Saturn individual must keep working even when everybody else has gone to bed. A lot of people don’t know the hard-won success of the Saturn person nor understand that they have to build something stone by stone.

The Saturn person is very much aware that they have to make the most of their limited resources. Saturn is the archetypal taskmaster and he was the god of earth, governing the passage of time, symbolising the motto that as we sow, so shall we reap. Saturn is the planet of enduring structures, and rules our need for security, embodying ours hopes and goals into concrete form. The planet also rules preservation, maintenance, and a solid contribution to life.

Saturn indicates delays, falls, and is the most dependent on succeeding and having ambitions realized. It helps negate an inner security, and also proves that the individual can accomplish his or her goals. Often pain is an inherent part of the process, but they must never give-up, and that is usually the core lesson of any Saturn challenge.

Others may talk about all the things they’d like to do if circumstances allowed. You will actually put your shoulder to the wheel and make it happen. Industrious hardworking, you will build castles out of toothpicks”. By Christopher Renstrom, Ruling Planets – The Child of Saturn.

Here are some Sun-Saturn interpretations from the blog:

This is the person found in positions of authority, teaching, laborious jobs, research and anything demanding the use of discipline, organization, and effort. As well as, building structure in their life they can build a business, establish a security base and conserve their resources.” Most of life demands they put in the necessary effort, time and application. Any aspect between these two planets feels a heavy internal pressure to make something out of their life. Basically, through frustrating circumstances the individual grows in his or her ability to handle the material world. They gain maturity, authority, and learn the virtue of persisting in the face of extreme resistance. The person has the chance to prove their endurance, and learn to overcome their insecurities. Sun-Saturn is calling on the individual for commitment, self-reliance, and hard work. Many with this aspect if they have put in the effort will look back on their lives with a real sense of accomplishment. Being able to see themselves in a positive light may become the key to success.

Many of these individuals want to be in a position of authority, or need to make a unique contribution to society. The theme of consolidation and building is a large one, and careers in management, law, scientific research, and teaching may suit them well. They are suited to careers that require methodical application of knowledge and experience. While it might appear that other people or the outer world is opposing them, these challenges support the individual development of their talents, abilities and self-confidence. .The individual’s world is held together by sustained effort, and there is such a deep-seated longing for worldly success. Moreover, their own experience tends toward heavy lifting rather than lightning strike achievements, and they are inherently mistrustful of quick routes to success. Instead, there is deep admiration of anyone who has managed to get “up there” and sustain what he has earned.

The planet Neptune is the antithesis of Saturn and rules over the limitless, infinity, and represents our emotional and spiritual experience. It also rules over our dreams, longings, and illusory sates. Neptune represents artistic expression though art, music, writing, drama and film. The planet is least concerned with individuality and belongs to the collective realm embodying our aspirations.

Saturn in aspect to Neptune below:

When Saturn is conjunct, square or opposite Neptune in the natal chart it helps to ground the inspirations, dreams and longings into some kind of practical form. Neptune has a talent for putting its finger on collective feelings and poets, artists and writers are all challenged to create something. Saturn-Neptune people may often find their dreams challenged, criticised and harshly received. However, art, music, drama or some other Neptunian pursuit can be made into something real. Long-held dreams are accomplished after much hard work and the individual realizes that it wasn’t all just a serious illusion.