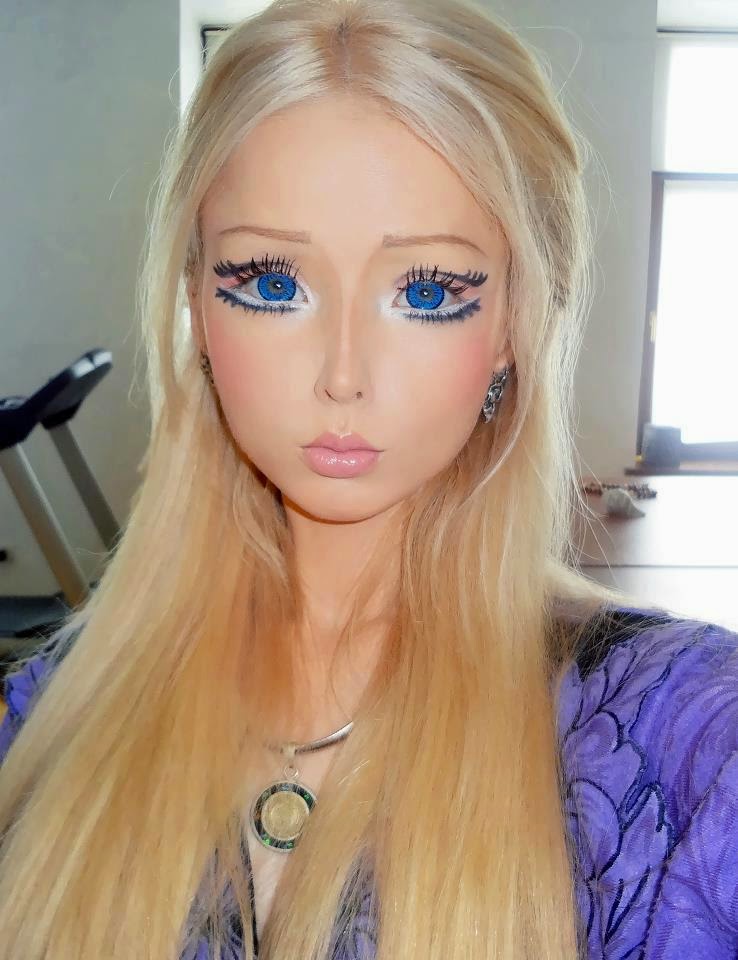 The living doll, Valeria Valeryevna Lukyanova, is a Ukraine model, but is more popularly known as the real life Barbie. According to reports she has only had plastic surgery on her breasts and the rest is created through the trickery of make-up. Also, there are many reports that say her look has been manipulated by others through the use of Photoshop. Online video shows that she actually looks normal. The tiny waist is achieved by an all liquid diet and regular exercising. Plus, she never smiles and poses in doll-like ways to further convince us. Some people say she is just living in a fantasy world and choosing to look “unreal”.

Valeria is also referred to as Space Barbie and expresses the belief that she is from the planet Venus believing in past life memories from other planets and her other name being Amatue. Val said that when she was between 12 and 13 years old she saw subtle worlds, and different spirits from different dimensions. They would come to her at night and she would see spirals around these beings. Now, she is currently a lecturer on out-of-body experiences and leads seminars on spiritual subjects, this is done at an international school in which instructors show students how to leave their physical body and travel in their spiritual body, where you can visit any place on the planet and in the universe.

The model claims that she uses her appearance to gain attention for her spiritual ideas, saying that as a beautiful and inspiring woman more people will take notice. The internet sensation has posted videos of herself as this otherworldly being, saying things like: “I am everything, everything is god, everything is love, I am you, and you are me”.

In valeria’s chart she possesses a critical Sun trine Neptune aspect. The Sun and Neptune are at 0 degrees and the aspect involves the Sun in Virgo and Neptune in Capricorn. Carol Rushman says that critical degrees have more weight, importance and intensity giving extra emphasis on the planet’s meaning, and the things that the planet represents are strong issues in the person’s life.

Here is an interpretation of Sun trine Neptune from this blog:

The spiritual path of mysticism is sometimes sought because they connect very comfortably with the idea of the self, dreams, and the ideals they pursue in life. The individual has something of the mystique about their personality, and the path of service is often a route taken as these people are highly sensitised and possess an empathetic and sympathetic character. Sun trine Neptune individuals have a somewhat psychic and intuitive nature, and are extremely sensitive to all moods and can absorb creative images with their strong fantasy, inspirations and dream life.

Much of this inspiration comes from the unconscious levels of the self that is supplying them with an endless well of answers in the form of imagery such as symbols. This aspect was once described as having the ability to hear the harmony of the spheres, and so they are quite sensitive and attuned to this other, more heavenly reality. Sun-Neptune has the instinctive ability to be someone else for a while and its why many of them do well in the acting profession. A love of animals is also noted to be frequent feature of this aspect, and psychologists believe that animals help to alleviate loneliness, and they also express unconditional love and make us feel accepted.

Valeria is a vegetarian and believes that we are all one. The young woman makes for an interesting study and for the actual “fantasy look” this would probably also be Sun trine Neptune searching for her dream and ideal self. The Sun-Neptune interpretation from Astrofix is apt and a rather good reading for our Spiritual Barbie with many other points to consider:

Haunted 2 (Pluto in the 8th House)