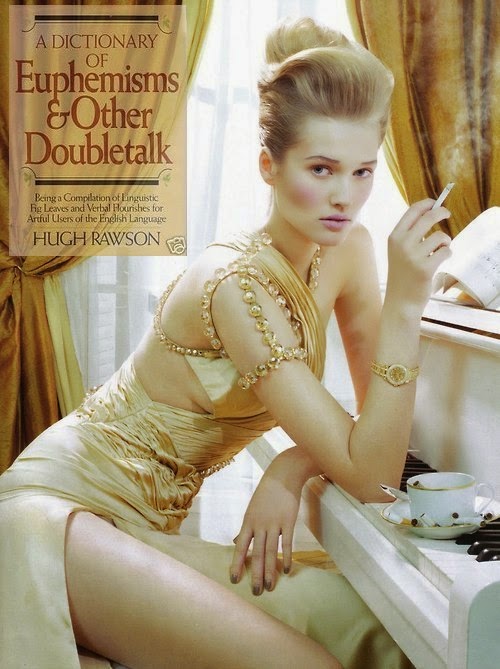 Euphemisms and double-talk would appear to be somewhat Mercurial and Gemini in nature. The quote in the introduction of the book: A Dictionary of Euphemisms and Other Doubletalk could easily fit the sign of the twins: “The tongue of a man is a twisty thing, there are plenty of words there of every kind, the range of words is wide, and their variance – The Lliad of Homer.” The Gemini type can do all kinds of chattering, double-talk, with a fascination for words, plus learning through a variety of experiences. The type enjoys playing around with words, and the person often has great fun. Marilyn Monroe [Gemini] said: “It’s not true that I had nothing on. I had the radio on.”

In Gemini, there is a mental curiosity, but the sign always needs mental stimulation, sometimes coming through the form of gossip and small talk. New places, new people, new activities are all like oxygen to the Gemini’s brain. Language is on the top of their list for being the most intellectually stimulating of games. Euphemisms are also ways of discussing things without actually having to state the obvious because of embarrassment, fear or to be polite in conversation. We are also travelling light-footed over those conversations without ever really touching deeply in a fashion similar to Hermes and his winged sandals.

“Yet Euphemisms have a very serious reason for being. They conceal the things people fear the most – death, the dead, the supernatural.” Though concerning death, Mitch Albom [Gemini] once said, “The act of burying things seems much more natural, but the act of digging them up does not.” However, Depth psychology would argue that it is necessary to do this, for we quickly bury things that have never really been allowed to live in our consciousness, they have been thrown into the basement. The Pluto realm rules the unknown, dark and haunting, and we often have to delve back into the difficult terrain of the 8th house and our trauma in order to heal and then give those things that caused us pain a proper burial. The only way of doing this is to be able to talk about it, but our everyday conversations rarely involve the 8th house of the hidden, mysterious or psychic.

“Euphemisms cover up the facts of life – of sex, and reproduction and excretion… They are beloved by individuals and institutions (governments, especially) who are anxious to present only the most handsomest possible images of themselves and the world…The same sophisticates who look down their noses at little boy’s room and other euphemisms of that ilk will nevertheless say that they are going to the bathroom when no bath is intended; that Mary has been sleeping around even though she has been getting precious little shut eye; that John has passed away or even departed (as if he’d just made the train to Darien); and that Sam and Janet are friends, which sounds a lot better than “illicit lovers.”

The use of Euphemisms seemingly developed to aid us in talking about things that we are ashamed, mortified and feel fearful about. A lot of them are used when we talk about tabooed language. As you might have guessed, a lot is to cover up many of Scorpio, 8th house, and Pluto meanings; the stuff we brush under the carpet, the things we dare not confront directly. It rules over the occult, every taboo, and sex. Pluto lives in boxes which people don’t open. The 8th house taboos are often talked about in general conversation using euphemisms, and we seem to use language as a mask when confronting the issues of the 8th house. M. D Dallochio said – “Stigma’s power lies in silence. The silence that persists when discussion and action should be taking place.”

The silence one imposes on another for speaking up on a taboo subject, branding them with a label until they are rendered mute or preferably unheard.” We become familiar with the nature of taboos when hearing the hushed tones, uncomfortable silences, and see fear flicker across an individual’s face when confronted with a scary word, and a study of history and the development of language places all this into a larger context and we realize we have been avoiding 8th house issues for an incredibly long time. Many taboo subjects have endured such a battle to be talked about openly.

Astrologer Liz Greene says that Gemini and Scorpio personify the opposite poles of water and air beautifully, “Scorpio is a water sign and highly subjective, with feeling based responses. And the typical Scorpio will rarely put up with evasiveness since his nature compels him to dig to the bottom of any issue to discover the hidden roots and meanings. Gemini can’t bear to be psychoanalyzed, largely because he’s terrified of what he’ll find underneath…”

Many things in the 8th house are secretive, private, and don’t necessarily have to be aired in the street. A deep fear has existed that if we say the actual word it would give it power, many folks were afraid to say God’s name directly and the Devil. The whole use of language in this way also reminded me of the air signs in general for the way we could distance ourselves from touchy subjects, and even mass murder could be, through the use of euphemism, turned into something polite and almost civil, covering up the real truth and the most atrocious acts. Examples of this include: murder being translated into executive action, remains are found (not bodies) and rape in England and the United States was barred for years and they were only allowed to use the word assault.

In general our air sign nature tends to take us away from a primitive expression, it raises us above it all, and it is of this nature that we can rationalize almost anything away. The tendency for air is to refine nature, even at its basest, there needs to be some sort of conceptual understanding, they want to be clear and approach something in the most intelligent way. For air itself, according to psychological astrology, is opposite in nature to the water signs. A lot of the psychological school of thought say it’s air that makes us most human due to our ability to think and interpret the world around us. I believe what makes us most human is both the ability to think and feel.

Stephen Arroyo related air to the trinity of social relationships saying that concepts dominated most of their lives. Air signs are intellectual and being ruled by the element of air their minds reach great heights beyond the clouds to the universe. As water has the gift of reaching great depths on the emotional level through the deepest oceans. Perhaps we will always struggle with the opposite ends of the elements, we might also need to the use of euphemism for uncomfortable subjects, as it seems vital to the individual in helping to at least approach 8th house matters.

Mother-Moon-Astrology: Scorpio Themes
Those with Moon-Pluto aspects in the chart, Moon in Scorpio or Moon in the 8th house, have great intensity of feeling, survival instincts and a need to merge emotionally with others. The relations...
Moon-Saturn: In Therapy
The Moon in aspect to Saturn represents the part of your nature where you need to build self-esteem and confidence. Hence, your method of healing involves you accessing your closed off (Saturn) emotio...
Scorpio: Sex and Revenge - You'll Get What's Coming To You
We have all read about Scorpio's need for revenge after being wronged. The Scorpion is prone to vindictiveness when scorned and will carry grudges into the afterlife. We're warned time and time agai...
Cancer/Moon Astrology: She Wolf
Before all Cancerians and Moon people start dancing sexily to Shakira’s She Wolf as it is their song [howls]. This post actually concerns the hungry nature of the Moon and a woman’s eating disorder. T...
If You Could Design Your Kid's Chart
Question: If you could design your kid's chart would give him lots of trines? I'm not really into designing a natal chart. It's unrealistic and unfair. You can't really "rig" the chart for perfect ...
Female Rivalry: Venus in Gemini
Venus in mythology was sometimes referred to as the “dark one” because of the tragedies which resulted from her passions. Aphrodite in myth would create terrible punishments when she was not the rever...