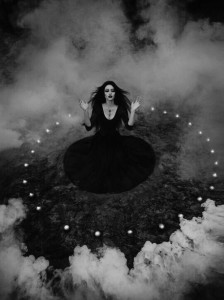 Scorpio, Pluto, and the 8th house have a powerful relationship to Zero in numerology. The circle represents nothing and infinity and it struck fear into ancient people who refused to use it in mathematics, they were so terrified of the void of zero, and could not understand how anything could come from nothing and it represented something unknown and frightening, how could we reach a dead-end? The two circles together make up the number 8 representing the eternal and symbolic of the cycle that never ends, similar to the “family Cycle” that is depicted in the Scorpio’s house as in the case of the family complex. In Arabic numerals the number 0 bears the shape of an egg, to indicate that all things emerge from it.

Scorpio, Pluto, and 8th house people often penetrate life to its core, seeking reality using its insatiable need to know what is, in truth, hiding behind the veil of existence. It represents the overhaul of attitudes, beliefs and values that can change dramatically over the course of a lifespan.

Scorpio, Pluto, and 8th house people are the types of people that lock us into talks about the afterlife, the occult, witchcraft, and all manner of things supernatural. The individual likes to delve into such matters to stay ahead in the “nobody else knows this information department.” The individual is secretive and often knows considerably more than is revealed. Moreover, they penetrate to the root of things. In fact, they will violate the unknown, intrude into another person’s space, interrogate, and overstep boundaries, in order to know.

The Pluto individual possesses a cool, mysterious, quiet, mystique.  The number zero represents eternity, the circle of the serpent eating its own tail, an Ouroboros, from the negative, feminine energy, representing the immortal soul. Joseph Campbell said, that it is constantly throwing off death and being born again. The purpose behind it all was to unify all of man’s emotional and psychic centers, in an eternally circular process called the “will to power” and towards transformation into renewal. It is both the source of life and death and its continuing cycles with everything beginning anew. The serpent is also viewed as the “secret knowledge” given to Eve, the “forbidden fruit” from the tree of Knowledge, that was later called the original sin.

Add zero to any number and it increases in power and size, add more zeroes and the power will keep increasing stretching out into eternity. Hades original name meant “invisible or “unseen” and Greeks often referred to him as Pluton (“the rich one.”) Place 0 in front of a number and it consumes all numbers – zero divided by a number is always zero. According to Charles Seife zero could punch a hole in the neat order of the universe and for that reason could not be tolerated. The masters of geometry couldn’t use zero because it has no height, no width, meaning there was no substance at all, so it might not as well exist, and defied nature.

Scorpio’s popular phrase is all or nothing, and they can reach the greatest heights, but also fall down into a black hole. The dark kills light, and light kills dark, and in the light of consciousness and the darkness of oblivion. It ranges from power to powerlessness.  To live in both greater heights and depths really epitomizes Scorpio’s ability to reach the bottom and rise to the top. Pluto can be our greatest source of power and also destruction. In myth, in the Hades Kingdom, once a person had passed into the underworld there was no going back, and the irrevocability of death is seen in zero, and it also rules the immortal soul. Pluto destroys what we have outgrown, so there are also many beginnings and endings.

Like the ancients, Descartes assumed that nothing, not even knowledge, can be created out of nothing, which means that all ideas-all philosophies, all notions, all future discoveries-already exist in people’s brains when they are born. Learning is just the process of uncovering that previously imprinted code of laws about the workings of the universe. Since we have a concept of an infinite perfect being in our minds, Descartes then argued that this infinite and perfect being-God-must exist. All other beings are less than divine; they are finite. They all lie somewhere between God and nought. They are a combination of infinity and zero. However, though zero appeared and reappeared throughout Descartes’s philosophy, Descartes insisted unto his death that the void-the ultimate zero-does not exist. A child of the Counter-Reformation, Descartes learned about Aristotle at the very moment when the church was relying upon his principles the most. As a result, Descartes, indoctrinated with the Aristotelian philosophy, denied the existence of the vacuum. Zero, by Charles Seif

Zero crossed over from mathematics to physics. In thermodynamics a zero became an uncrossable barrier: the coldest temperature possible. In Einstein’s theory of general relativity, a zero became a black hole, a monstrous star that swallows entire suns. In quantum mechanics, a zero is responsible for a bizarre source of energy-infinite and ubiquitous, present even in the deepest vacuum-and a phantom force exerted by nothing at all.  Zero, by Charles Seife