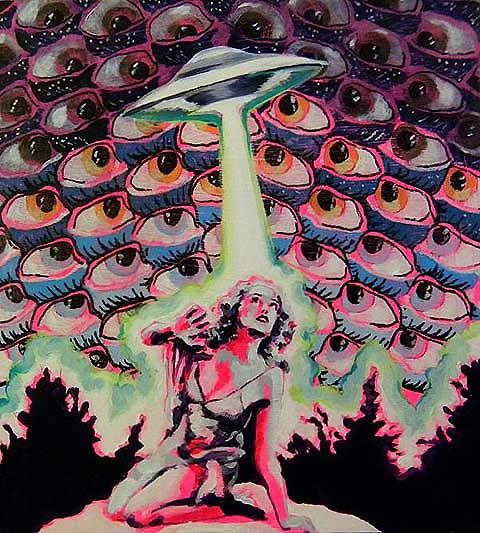 Uranus is the co-ruler of Aquarius along with Saturn, and this electrifying planet takes us into the higher mind and gives us a clear perspective and capacity for seeing the future in a blinding flash of clarity. This planet is a great Awakener and it brings visions and revelations. Uranus has come to be associated with things such as invention, space, science, technology, electricity, computing, aviation, and exploration. Science has been described as a dangerous toy in the hands of children who do not understand it. However, this higher knowledge has brought us out of exhaustive labors and has advanced us in many ways, but it doesn’t always make a comfortable bedfellow with human nature.

Uranus governs the realm of the great upheavals of ideas and ideologies which have so often created disruption and transformation in the structures of society. Whenever there is a major breakthrough it seems to appear around the globe at the same time. The theory is that when an idea is ready to progress – the seeds of the idea are released to us, and usually, those with the planet emphasized begin to receive this new enlightenment or a progressive vision. That is why we often see people with the same idea at the same time. The planet rules the flash of inspiration of seeing something before it has been created, often we also need Saturn as it represents the part of us that works to make that creation materialize.

Uranus is concerned with the truth and the kind of realizations that cut through everything. Uranus challenges all that has become stuck, sterile, and predictable. Its message is fiercely anti-establishment and unconventional. Planets touched by Uranus seek excitement, freedom, and independence. In early life, strong Uranian contacts in the chart signify that there was probably not too much in the way of predictability and anchorage, instead, some kind of sudden disruption, shock or at least some inconsistency is indicated. Uranus rules those events that shake us to our very foundations, and indeed astrological studies have shown Uranus to be close to the epicenter at the time of an earthquake. Individuals with Uranian contacts seem, habitually, to recreate disruption in adulthood: rejection, alienation, estrangement, and feelings of isolation are all major emotional experiences to be associated with this planet. The notion of rejection is actually the insistence on independence. Uranus can appear to an individual as a sudden event that rips away the fabric of a previous reality, revealing the light of truth, but also doing and it a highly painful way.

Uranus is the enemy of the tried and tested path and seeks to break free of things that tie us to the past, or limits us in some way. This planet also symbolizes the urge for rebellion and for instigating a new order that reflects a more progressive way of thinking. We all have the spirit of rebellion within us and never completely suppress our tendency, in the Uranian sphere of life, to test our limits. Some rebels break-away from every rule and expectation violently going against or ignoring society’s boundaries. In times of revolution when Uranus is breaking down an old social order, and a new vision has emerged, often events happen that send shock waves across the nation. Maintaining this remarkably strong link with revolutionary change, modern astrology associates Uranus with radical idealism.

Uranus is also known as the ‘heavenly man’ or the creative mind of God. The planet symbolizes the power of the human mind to reach the realm of “universal ideas” and apply them to everyday lives. This is not the realm of the rational mind that belongs to Mercury, but that part of the intuitive mind that is capable of grasping whole concepts in a single blinding flash of insight. Uranus seems to personify the need within the psyche to break free of identification with the physical world and experience the world of archetypal mind. As Edgar Cayce says in his readings, “Mind is the builder.” We become what our mind dwells upon. If we attain a higher consciousness and live by our ideals we may achieve liberation.

According to a Russian Rocket Scientist

The Earth is the cradle of humanity, but mankind cannot stay in the cradle forever

Channeled Information: The Differences Between Uranus and Aquarius