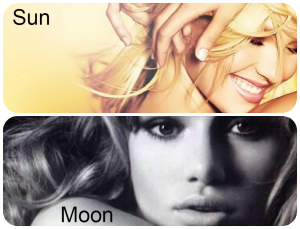 The Sun is related to gold and was traditionally associated with divine powers because of its impermeability; it is resistant to both fire and water. To emulate the qualities of Gold was to partake of divinity and immortality. The colour of Gold is the colour of the Sun as silver the Moon, the two great celestial powers that rule over life by the masculine, daylight and consciousness (Sun) and by night through the feminine, dreams, the soul and the unconscious. The Sun and Moon have always had this special relationship and in spiritual terms represents the mystic union of the soul and the body when the Elixir was achieved. This became known as the conjunction, sometimes referred to as the chemical wedding, the marriage of the king and queen. The Sun and Moon fulfilling a divine destiny in the lives of all human beings is the real and true meaning of these guiding lights in the sky.

From ancient times, people learned to construct calendars based on the Moon’s cycles. Time was first reckoned by the lunation’s and then by the Solar year, which had to be divided into the 12 lunar months—that is the Moon’s cycles, each of twenty-eight days; which was a sacred number, in the sense that the Moon could also be worshipped as woman as her cycle is also normally twenty-eight days. A powerful relationship has always existed between the Sun and Moon and both planets have always in older times been portents of great events, usually disasters, generally due to the eclipses.

Altogether the solar value is an outgoing one, masculine and positive. With the Moon it forms the basic psychological polarity, of which the most obvious externalisation is in sex. Hence the two bodies ought to always be considered together, the one furnishing the complimentary value to the other. The one is always the getter and giver, the other the keeper and preserver. The Sun tends upwards and outwards, and forwards in time, the Moon draws downward and inwards, and looks backwards to the past. By C.E.O Carter – Essays on the Foundations of Astrology

The Sun is our nearest star it is bright, hot and hard to ignore. The Sun has dominance over the world and is a life-giving ball of fire. The Sun is dazzlingly illuminating and represents the developing concept of who we are and what our right place is in the universe. The self-revealing light illumines our sense of purpose and direction and it is infused with a sense of authority and majesty that no other power can match. The Sun being such a creative force, ruling courage, strength, success, creativity, authority, general self-esteem, and leadership qualities. According to C.E.O Carter:

The Sun has always been something more than an ordinary planet. It is the astrological symbol of vital urge, the elan vital, life itself

The Moon has always functioned as a recorder of the story of a life our own private documentary. Similar to the lunar phases, memories fade, change or grow more lucid and full. Our memory of events also has a way of changing in appearance. The Moon can take us all the way back to any time and easily retrieves the relevant videotapes from the subconscious. We are usually then presented with a bunch of images, feelings and thoughts. Some people get stuck in replaying old memories and the Moon can sometimes hold us back from moving into the essence of the solar purpose. In esoteric texts, the Moon also suffocates us, if we cease to individuate and move forward.

The Moon is a kind of time travel into the past into autobiographical memory. It gives us the history of our identity, and it is like a bookmark reminding us of where we left the story. The Moon rules the imaginative and reflective side of the individual with unconscious impulses and emotional reactions. The Moon has its poetical leanings and is mankind’s greatest Muse. Louis MacNeil wrote about astrologers magical lyricism pouring forth when describing the silvery light, noting:

“She brings out the lyrical vein in astrologers no less than other people. The American astrologer Evangeline Adams writes: “She is Lustral water and mystic bearer of the Holy Grail”

All eyes turn watery eyed and moist in our descriptions of the lunar body – as if possessed by a late poet. It Is something wonderful to behold and we can all feel her rhythms or rhymes draw every soul to her shore.

Astrology itself may be about perfecting ourselves and relating to our divine nature. The Sun is the blazing fire and warms everything it touches with a glowing luminosity and it gives us a central purpose. The Moon is the remembrance of all things in the past and symbolizes a strong connection to the unconscious realm. Both are essential in understanding who we are, where we are going, and also where we have been.