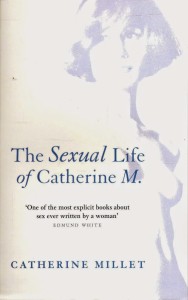 The Sexual Life of Catherine M. by Catherine Mullet is about an art critic discussing her sexual life, an autobiography filled with explicit content about sex ever written by a woman.

“…the most shocking thing about “The Sexual Life of Catherine M.,”… is that it isn’t particularly shocking at all. A good quarter of the time, it works as pornography (and I use the term in a descriptive sense, not a judgmental one); the rest of the time it’s a rumination on the nature of desire and pleasure and the experience of living a life that is specifically arranged to let desire and pleasure have their way with you. It’s titillating, explicit, dryly funny and sometimes exceedingly puzzling. The only truly shocking thing about it is that it was written by a straight woman and not a gay man.

I read the opening of this book of this woman living a life of sexual gratification and it looks honestly at sexuality. Sex was described in a Scorpionic sense, using its totem snake metaphor and the author relating sex to sloughing off  “the mechanical body” and being reborn. Naturally, I was expecting something Scorpion in the sexual area. Indeed, a Mars conjunct Pluto aspect is found in the sign of the Leo. Truly, this woman could be described as something of a sexual predator, in the nicest possible way. Mars-Pluto is a potent aspect in the sexual sense; it carries the shadowy underworld of sex through rape, sexual abuse, and sexual power. It also carries the immense transformative energy of catharsis and release.

Mars and Pluto together are usually thought of as the significators of rape and one thinks of rape in the sexual sense, which could apply here as Mars-Pluto is a common contact in the charts of both the raped and the rapist, but the real meaning of the word is to ‘take by force’ and this can be viewed in a variety of contexts. Those with Mars-Pluto contacts know all about ‘taking by force’; that’s usually a quality of the environment in which they are raised. Succumbing to such behavior themselves is not the usual manifestation but it can happen and it is what one might expect to happen to any child who has continually felt thwarted and powerless and angry. Aspects in Astrology: A Guide to Understanding Planetary Relationships in the Horoscope

Also the author, Sue Tompkins, suggests that the individual confronts sexual taboos of one sort of another. “For Mars-Pluto there is an aspect of sexuality which is experienced as dark, savage, and bestial, and this can be viewed as deeply exciting or life-threatening. “

Catherine Millet felt most at home lying on a table at a club named Chez Aimé, being penetrated by lines of unknown men. Page 18: ‘I was sometimes set upon so violently that I had to hold on to the ends of the table with both my hands and for a long time I bore the scar of a little gash above my coccyx, where my spine had rubbed against the rough wood.’ She liked sex and she particularly liked an orgy. Why? She liked the anonymity, the abandonment, the ‘delicious giddiness’. As a young woman she was shy – ‘awkward’, she says, at making relationships. Strangely, she felt more embarrassed with her clothes on than off; not so strangely, she disliked her body. To achieve transcendence through climax was to leave her self behind. ‘I was carried by the conviction that I rejoiced in extraordinary freedom. To fuck above and beyond any sense of disgust was not just a way of lowering oneself, it was to raise yourself above all prejudice. There are those who break taboos as powerful as incest. I settled for not having to choose my partners.’

Still, Millet hints at something that points squarely at the Mars/Saturn/Pluto conjunction that explains humiliating, shameful and sexually exploitative energy. The author subtly refers to sex as self-punishment, with guilt involved, and relating to self-esteem. As I delved through the articles for answers, a sad truth was revealed. Millet’s mother, Simone, suffered from a mental illness (taboo) which erupted into wild ‘episodes’ of insanity and ended in suicide (another taboo). The past is extremely dark, and there is a lot of buried rage underneath. Such strong Pluto aspects always pull back the curtain and expose the shadowy side of life. Millet was forced to grow up and become an adult. The early tragedy sheds light on the compulsive nature of Mars-Pluto in aspect.

Highly Plutonic episodes in life, along with leaving us deeply scarred, can also create this massive complex about us meeting the exact, same fate. However, it must be said, there are other psychological ways we react to tragedy, trauma and loss of innocence in childhood. If we can still call it a childhood, since Pluto tends to bury it in layers of darkness. It can also involve mystery and intrigue and powerfully transforming and deeply memorable moments of true closeness that few people will ever experience, even if it comes at a heavy price. One may suggest, there would have had to have been something that happened in the childhood involving feeling powerless and humiliated at some stage. Even though astrologers would head in this direction, looking at the Mars-Saturn-Pluto configuration we wouldn’t fully know the details.

“At the age of 23, after the death of her brother, she was subsumed by a feeling of ‘ mal de peau’ (‘feeling bad within her skin’) and went into psychoanalysis.”

One of the articles on Millet discussed the thoughts some of us may share on her dark history, fueling the sexual compulsions of an adult Millet:

Near the end she reveals what one half-suspected: “I wouldn’t be exaggerating if I said that, until I was about 35, I had not imagined that my own pleasure could be the aim of a sexual encounter.” She repeats this confession a few pages later: “For a large part of my life I fucked without regard to pleasure.” So it was no picnic after all to have a posse of strangers hammering her pelvis in a car park. Quelle surprise!

Millet possesses a Sun in Aries and it remained me of this acronym on Aries … Aries can use the acronym “IWWIWWWIWI” which stands for “I want what I want When and Where I want it.”Instant gratification, whatever desires he or she possesses, wants to be quickly fulfilled and on to the next conquest. What separates Millet from the wholly sexually driven woman is that she does have a brain, working on the high end of art critiquing, editing and publishing. A business that was self-launched and credit must be given to such powerful assertive energy within her horoscope.

The emergence of a voracious woman unsentimentally pursuing her own sensual pleasure without recourse to protocol or pleasantry is particularly potent when accompanied by a high IQ and a talent for articulate communication.”

We could look at other factors in the nativity, like the sexual wounding (Mars-Chiron), and the freedom loving, cultural diversity of Jupiter in its own sign of Sagittarius opposite Uranus in Gemini. We could also examine the exact Sun opposite Neptune aspect resulting in super-sensitivity, loose boundaries, and not knowing who she really is. Also, running away from reality, but there are the incredible artistic vision and sensitivity to art, with an intense appreciation for sound, colour, and the visual. A Mercury square Uranus contact is often seen in the charts of those that stir up controversial debate and who also love to shock others. Many factors come into play, making a whole personality.

We can blindly assume a lot of things about Millet, but we have no direct access to her history and no doorway into the psyche. However, these astrological pointers are still exceptionally revealing and portray the woman behind all of the art critiquing, sexual desires and longing for transformation and transcendence. The urge to merge and to be penetrated and to transform something within on a deeper level of her being. Maybe I am being rather polite wrapping up this post. Obviously, there are strong opinions about Millet. I don’t feel the need to judge her lifestyle, I was mostly interested in what drives the sexual compulsion and some of those answers were found. An interesting woman, and a highly interesting life.

Quotes taken from : The Double Life of Catherine M and Pelvic Flaw