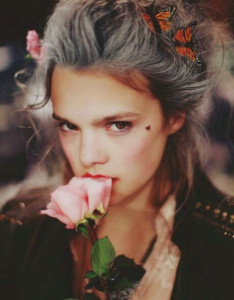 Known as Hades in Greek mythology, Pluto is the god of the underworld which, psychologically could be said to indicate our deepest depths in the world of the unconscious. Moreover, Pluto lies at the core of the ancient Persephone myth, whereby it describes  an essential transformation: a renewal a metamorphosis in a situation where initially there appears to be only trespass and violation. While gathering flowers this beautiful woman is magnetically drawn to an especially alluring petalled beauty, but by uprooting it she unintentionally opened a hole to the Plutonian abyss. From there she was pulled down into a  void where she was raped by an invisible god form, a shadowy figure, Hades. The Lord of the underworld compelled her to marry him and relocate to his realm. In Jungian terms, the flower is not just a flower but an opening into her own psyche. The entire mythological story encapsulates loss, grieving,  and acceptance; ultimately it corresponds to rebirth.  Jung equates the archetypal maiden, who exposes herself to all types of danger because of her youth and naivete as a great passage through darkness and one many of us must ultimately face. In the end, she is no longer the same person and the maiden might even become the “queen of the underworld” and relish her new-found nature, thus being transformed by her own mysteries.

Pluto symbolizes the most subterranean level of collective energy; it is called the great timekeeper; the aspect of fate. “The Moving Finger writes; and having writ, moves on: not all piety nor wit shall lure it back to cancel half a line, nor all your tears wash a word of it.” The dark planet also represents human beings instinctive power, a river of desires, impulses and deepest urges. On a mass level Pluto is unspeakable horrors, and the cruel things that others do that make no sense to the hearts of good people. Personally, it represents our unfulfilled passions, compulsions, and poison.

When Pluto features in our lives it is a hidden force of initiation a passage of growth and where change comes out of nowhere but changes our lives forever. In evolutionary astrology, the “wound” of the personality (Pluto) is usually well-defended, but in this emptiness lies endless possibilities for growth and transformation. Furthermore, according to psychology astrology if we deny, repress and banish a part of the soul the only way it can reach us is through rape and abduction. It is a fact of life, all human beings are flawed creatures, married couples don’t live happily ever after, tragic accidents, serious illnesses, and great misfortunes often befall people who don’t seem to deserve them.

Out of pain, chronic darkness, desolation, grief, loneliness, despair, hopelessness, involuntary descent, rape, death and endless nights comes the wisdom of our world. Divine knowledge has its root in this icy planet, esoteric understanding and truth is found in life’s mystery. Inevitably, Pluto is death and life are cradled in its arms; every atom, as soon as it is born begins to die as we age. Pluto is a planet where the shadows are twice as long, the temperature is freezing and it is something of an icy and snowy landscape, eerily silent, with a quality of abandonment, dormant energy, loneliness, solitude, but also a quiet strength and unseen reality.