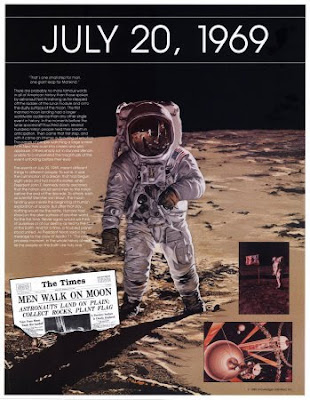 Apollo 11 was the fifth mission of the Apollo Project and the third to take humans to the Moon. The spaceflight was launched on July 16, 1969, and it culminated in Commander Neil Armstrong and lunar module pilot Edwin ‘Buzz’ Aldrin walking on the Moon. The resounding success of the mission was heightened by its fulfillment of President Kennedy’s statement of hope in 1961: ‘I believe that this nation should commit itself to the goal, before this decade is out, of landing man on the Moon and returning him safely to Earth.’ The Jupiter-Uranus conjunction in Libra (0 degrees) occurred at the same time. Jupiter rules expansive journeys and Uranus rules outer space. The large television (Jupiter) broadcast (Uranus) marked a major event of our time. The year 69 closely resembles the symbol for Cancer. The fourth sign of the zodiac, which is ruled by the Moon. However, this isn’t real astrological symbolism. It was Cancer’s birthday too, with the Sun moving through Cancer (69) and entering the critical degrees.

The critical degrees are the beginning of a sign and the last degrees of a sign are also said to be critical (27, 28, 29). Some astrologers believe a planet is weaker when it reaches the end of a sign, but it proves the lunar energy was particularly potent. Hopefully, 2010/11 will be just as exciting for us. I wasn’t born during the time of the Moon landing, but I was here during the cloning of Dolly the Sheep under the Jupiter/Uranus conjunction in Aquarius in 1997. It wasn’t the same as man landing on the Moon (sulks), hopefully, we have something great to talk about in the years to come with this next conjunction. I can’t stand all this waiting.