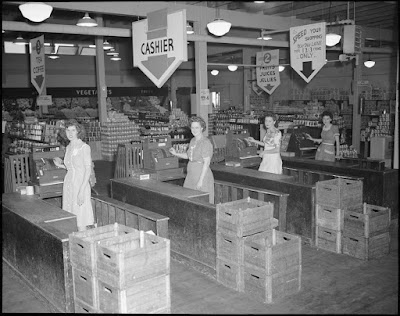 In March 1949, the British government announced that it would licence 100 companies to try out self-service shops, which had already been trialed successfully in America. The move marked the birth of the modern supermarket. Instead of queuing to be served, customers would be able to select pre-wrapped items themselves, put them in a basket or trolley, and take their purchases to a checkout near the exit. It was hoped that the altered layout would reduce staffing requiring thus lowering costs, and make shopping more efficient for everyone.

During this period Saturn had entered the service orientated sign of Virgo. Acting as an important marker for this new time-saving and efficient way of shopping for food. Saturn rules limitations, boundaries, structure, self-sufficiency and challenges us to overcome obstacles. The planet compels us to seek solutions, set goals and establish schedules. Virgo is the vessel of service, routine, efficiency, utilizing time in the best way possible and rejecting that which has no practical value. On a world scale, Saturn in Virgo represents a time to look at working ethics in society and at efficient ways off getting the job done. The president of the London Cooperative Society said, ”The ’Serve yourself’ service is the system of the future, whether the private traders like it or not. The housewives like it. And that’s enough“. I was born 30 years later and so I can’t imagine how we shopped any other way. Being slightly more advanced we now have Internet shopping, so there.