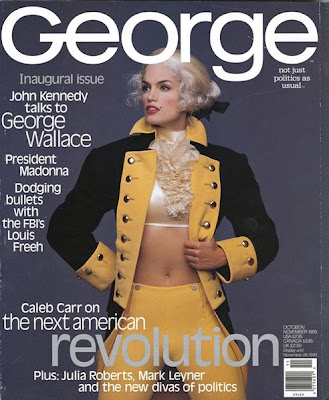 I found this great shot of Cindy Crawford, and this revolutionary beauty picture was taken in 1995 when transiting Uranus was conjunct Cindy’s Venus in Capricorn on the 29th degree . The inaugural issue of George, a short lived political magazine in the 1990s, featured Crawford dressed like George Washington on the cover.

In 2005, The American Society of Magazine Editors listed it as the 22nd best magazine cover of the last 40 years. Uranus is the planet of revolution and the modern age, and rules everything cutting edge, shocking, and is both original and inventive.

The planet stirs up restlessness, and it craves freedom and whenever Uranus is hanging about we experience a sudden turn of events and we also feel more rebellious. Uranus rules everything that captures us by surprise. Venus is the goddess of love and beauty and shows what we value and enjoy. Transiting Uranus to Venus describes a more exciting and unconventional beauty, and we can sometimes change our usual dress style under this transit, and unexpected love can also happen. With Uranus transits expect the unexpected, but also try something new and different.

Venus conjunct Uranus tends to universalize romantic Venus so that there’s a humanistic quality to the feeling nature. The desire for freedom and autonomy colours the way relationships are conducted: no matter how powerful the feeling, it in’t allowed to inhibit individual desires. This aspect also shows an ability to love others for their individuality and may express as a unique form of creativity. The desire to experiment- sexually;y and emotionally – is also an inducement to avoid commitment, which may be difficult to make. Character and Fate: The Psychology of the Birthchart (Arkana’s Contemporary Astrology Series)