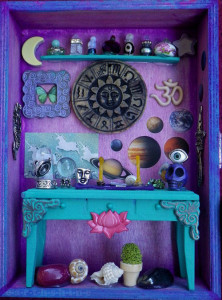 I was introduced to my horoscope through Russell Grant’s Astrology Kit. I received the astro-pack from my parents. It was easy to follow, but I messed up the chart drawings quite a few times until I got it right. The planetary positions and finding the rising degree was difficult to work out at first, along with learning and drawing the astrological symbols. However, when I really started getting serious about learning astrology it was when transiting Uranus was conjunct my natal Sun. I bought a computer and then started to post on astrological forums. I liked discussing the subject with others, but I was forced out of the group, which was a good thing in the end. I went solo and started posting on a blog, and it was interesting to see what posts were popular versus the stuff that wasn’t so well-received. I’ve enjoyed having my place for astrology and developing an individual style. 1

It is also common to see strong transits or progressions to the client’s Uranus or transiting Uranus making some aspects to natal planets, at the time of the astrological consultation. A person’s first encounter with astrology – and that applies to us as well as clients – is often heralded by the shadowy figure of the great Titan carrying his stolen fire…When we begin something under a particular planetary configuration, it carries the qualities of that configuration. In other words, the chart for the moment you discovered astrology is not only a picture of the transits occurring in your chart – but it is also the birth chart for your involvement with astrology. And that birth chart interacts with your birth chart, reflecting how your pursuit of astrology affects you…For example, if one encounters astrology in a great revelatory burst when Uranus transits over the natal Sun, the whole course of one’s study will be subjected to a sense of excitement and revelation. Twenty years later, the Uranian vision which first awakened a sense of individual purpose will still be operative, and therefore the archetypal background of one’s particular worldview as an astrologer will be colored by the Promethean quality of that configuration. Liz Greene, The Astrologer, the Counsellor and the Priest: Two Seminars on Astrological Counselling