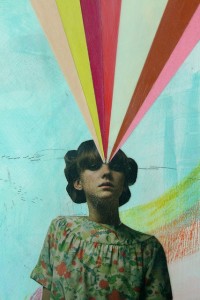 Sun Rising often possess leadership ability, and they need to strive for some kind of significance in life; to begin something new and execute it with confidence, self-reliance and assurance. Astrologically the Sun relates to the father and he may have had a powerful influence on the individual’s life. Aspects formed to the Sun describe how the individual perceives the father and his influence over them. Sometimes the father is a very dominating influence in the child’s first months of life. Often those with the Sun rising are pressured to succeed, and to stand out and be individual in some way. In many ways, they do need to set themselves apart from others and to follow one’s own path in life. The native has a need to “shine” in any field or area that interests them. More introverted personalities will not enjoy being on “show” all of the time, and Sun Ascendants have the most difficult job of trying to hide. It can result in the person being very self-confident and sure of themselves, but it may also make them feel self-conscious, and overly identified with their self-image in the eyes of others. Read the rest of Sun Rising

Moon Rising often accentuates the sign’s qualities in some way, and it is thought the individual may be very involved with the public. The position can lend empathy and the ability to nurture and please others. The person may approach others wanting to care and protect, and there is usually a responsive and adaptable approach to life. With the Moon hanging heavily over their life they may have had a strong female presence growing up, and the mother may be a very influential figure. These people are also sensitive and receptive to everything in their environment, have a vivid imagination and are intuitive. Vocational astrologers often list these people as being attracted to caring professions, gardening, and working with the public.

Mercury Rising is usually highly inquisitive for knowledge and has a powerful need for mental stimulation in their environment. They come across as intellectual, witty, youthful and may be recognised for their communication or writing skills. They may also be noted for their versatility and adaptability, but much of this depends on the sign. Some notable professions include lecturing, writing, and public speaking. This is someone who needs to analyse their environment, collect information, and be noticed for their knowledge. We may find someone who is very talkative or who likes to write a great deal, and they express themselves through the sign of Mercury. This placement is frequently listed as one of the top aspects for great writers. All planets ascending in the horoscope are important but those nearest the cusp have the highest influence, and Mercury, the planet of writing, communication and studying finds its strongest expression when placed on an angle.

Venus Rising is a good position for working in relationships and they sometimes have natural mediator qualities and seek to always be fair with others. Venus powerful in the chart usually has a strong need to be liked and to be popular. They may express themselves through art or beautiful clothing from jewellery to makeup. They often possess a strong artistic sense and view the world through what aesthetically pleases the senses. Maybe there is a powerful drive to make one as beautiful as possible. There is also a powerful need to please others, and a strong urge to create peace and harmony in their environment. Depending on the sign of Venus a strong affectionate nature may also be present in the individual.

Mars Rising tends to be assertive and likes to initiate plans and ideas, and they may also be highly competitive and challenging. Astrologer Sue Tompkins notes these people as having a vague feeling that conflict is about to break out at any minute, and that sometimes the person is born into a competitive environment or raised in an early atmosphere of conflict. Depending on sign and aspects these people tend to have a go-getting approach, and when Mars is sitting right on the Ascendant this can sometimes represent early births.

Jupiter Rising is often optimistic, generous, and enthusiastic in approach, and there is a powerful need to explore the world around them. They may be interested in teaching, travelling, sports, or even religious pursuits. Jupiter rising is usually keen to get on with life and enter each new phase of growth or adventure with an open mind. Life seems to offer them a chance to grow and explore the world around them.

As part of their development, they need to take on these risks and venture out further, past the usual boundaries. Distant horizons will beckon, and their life is set to undergo a process of great change and expansion. A Jupiter rising individual is born to develop new and greater potentials, but sometimes they are prone towards feeling intensely restless and discontented. They need to open up windows and view life through a larger lens and see what’s outside for them. Jupiter rising individuals are intuitive and gifted at making connections and develop a deepening of faith in life as they grow.

Saturn Rising can have an isolating influence which sometimes blocks the individual from social life and they can be highly defensive and self-protective. The planet Saturn is so self-sufficient the individual sometimes stands alone rather than relying on others to help them out. The foundations of their individuality are likely to be tested periodically, and may bring about deeply embedded fears and anxieties. Saturn Rising people must learn to have more faith in their own talents and abilities and they will be constantly “tested” throughout life. The goal is to cultivate self-reliance and the ability to cope with separateness. Sometimes they are overly influenced by what others think about them, but there is real ambition here and the real test is learning how to define their individuality and make something of themselves in the world. These people are realistic and extremely cautious in their approach, and many are learning to be these things and to carve out goals and think more seriously about what they want to achieve in life.

Saturn Rising may be drawn to science, architecture, or the study of older subjects, but vocationally a lot depends on the nature of the rest of the horoscope. This placement gives a drive for success, but it is only usually won through hard work, determination and self-control. It is believed by astrologers that a Jupiter Rising soul is eager to get out into the world and can’t wait to be born, whilst our Saturn Rising friends are less reluctant to jump into incarnation or even to be born at all! This reading is completely reminding me the movie Chances Are. Whatever the case, it is believed that there may be some form of waiting or delay at the time of birth.

Uranus Rising often makes the native very original or even eccentric, and sometimes very sudden in their movements. The individual may have some unique and unusual ways. They are usually drawn to groups and organisations where they can express their ideas and progressive natures. Sue Tompkins believes these people may look and be different in some way compared to others, and she lists them as being quite tall in height. They may experience some very sudden shifts and changes in their life. Uranus on the Ascendant is sometimes associated with an unusual birth, or some kind of shocking event happening ‘out of the blue’ at the time of their arrival or even in early childhood. The early environment may have pegged them out as different in some way or even outstanding.

Neptune Rising gives great sensitivity to life and sometimes psychic qualities are present. They need to follow a path that puts them in touch with this inspirational and deeply sensitive side, but one that does not allow them to lose their way in life. The boundaries of Neptune Rising are weak, and they are usually attracted to the helping professions, healing, art, music and film. Marilyn Monroe (Neptune Rising in Leo) lived life through the lens of a camera (Neptune); she was extremely photogenic and acted as a medium for the feelings and thoughts of others.

The birth stories for a powerful Neptune Rising are quite interesting and some involve the heavy use of anaesthetic, but sometimes there is a flood, or a highly sensitive and emotionally un-stabling event happening in the environment at the time of birth/early childhood. Maybe the heavy use of drugs in the environment may have been a problem. The astrological associations for early events are endless and the individual will best describe what sort of “Neptunian” experience was felt early on and it may be less dramatic than the above examples.

Pluto Rising gives a measure of intensity to the personality and it’s something that not everybody can handle. They need to deal with power issues their own and others. They are also interested in anything which explores the hidden depths of each situation. Those with Pluto Rising often report that there was a death in their early environment, and sometimes it was a parent or a close relative. The individual may have had a traumatic birth or there is some kind of issue around survival. Either way, Pluto Rising seems to set up a dramatic situation in order for the person to grow and change.

The planet Pluto resents stagnation in life, so these people are always forced to change in some way. Often these individuals are exposed to the darker sides of life earlier than usual, like abuse, family secrets, early trauma, but this also makes them highly sensitive to danger and extremely self-protective. Sue Tompkins likens these people to wearing sunglasses, so they always keep a part of themselves hidden from view, but she also notes that this need to hide can be crippling to their sense of personal identity. Sue Tompkins also links Pluto to the personal grandmother and noted that she may have a powerful and even domineering role in the individual’s life.