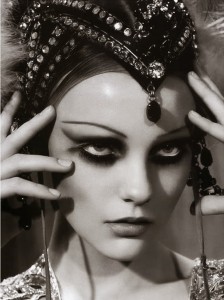 The Queen of the night; the female power of mystery and luminous light. The Moon is known as the mother of precognition conjuring up images of magic and even witchcraft, but there are also elements of madness (it influences murderers with homicides peaking at the time of the Full Moon). Everything we experience is automatically coated in emotion, and if we are not feeling we are not breathing. It is within this realm where we are drawn towards the unconscious and this night luminary is a transporter and keeper of the soul. Poets, farmers and midnight lovers are all attracted to the spell of this heavenly body. This inner archetype rules all the emotions under its mystical operation and we see it working through dreams and intuition seducing us in mysterious ways.

In many parts of the world, the Moon was linked symbolically with the regenerative power of life and she is not only known as the Mother but also maiden and crone. The lunar body changes shape and moves through phases and on the basis of this luminary’s cycle the first concepts of reincarnation and karma began to develop representing birth, growth, evolution, maturity, aging, and death. The ancients observed the Moon and markings on bones and cave walls and it showed that lunar cycles were being noted as early as twenty-five thousand years ago.

The feminine menstrual cycle lasts about as long as the lunar cycle linking women to that remote silvery body. Menstruation itself terrified men for centuries and it was the Jews that apparently believed one drop of blood from that time of the month will kill a plant. The word “menses” comes from the Latin word “month,” which comes from the Anglo Saxon word “Mona,” from which our familiar word “Moon” derives. There is also a belief that a woman tends to menstruate at the phase of the Moon under which she was born, if her cycle is regular, 28 or so days.

The further mystery of birth connected woman to the idea of darkness. Motherhood also being linked to earth where blackness dominates. The Moon rules the night by the reflection of the Sun and is an important counterpart to the outer personality. The gorgeous nighttime stars play backdrop on a black canvas to this lunar body. The goddess (Moon) of the nighttime world leaves engraved experiences embedded deep within the unconscious. Sometimes when we are hurt we can respond hysterically and be overtaken by lunacy, revealing the dark and primitive side of our nature.

The Moon part of us is self-protective, almost living life curved up in a ball. It is our feelings that affect our psychology and it is our unique personal response to joy, happiness, and also sadness. The Moon is most visible within the private spaces we create for ourselves and only those close to us get to see our secrets and deeper workings and reach into the mystery of our heart.

Woman is the most superstitious animal beneath the moon. When a woman has a premonition that Tuesday will be a disaster, to which a man pays no heed, he will very likely lose his fortune then. This is not meant to be an occult or mystic remark. The female body is a vessel, and the universe drops its secrets into her far more quickly than it communicates them to the male.
Edward Dahlberg ―

Her antiquity in preceding and surviving succeeding tellurian generations: her nocturnal predominance: her satellitic dependence: her luminary reflection: her constancy under all her phases, rising and setting by her appointed times, waxing and waning: the forced invariability of her aspect: her indeterminate response to inaffirmative interrogation: her potency over effluent and refluent waters: her power to enamour, to mortify, to invest with beauty, to render insane, to incite to and aid delinquency: the tranquil inscrutability of her visage: the terribility of her isolated dominant resplendent propinquity: her omens of tempest and of calm: the stimulation of her light, her motion and her presence: the admonition of her craters, her arid seas, her silence: her splendour, when visible: her attraction, when invisible.
― James Joyce, Ulysses

“Who says you cannot hold the moon in your hand?

Tonight when the stars come out and the moon rises in the velvet sky, look outside your window, then raise your hand and position your fingers around the disk of light.