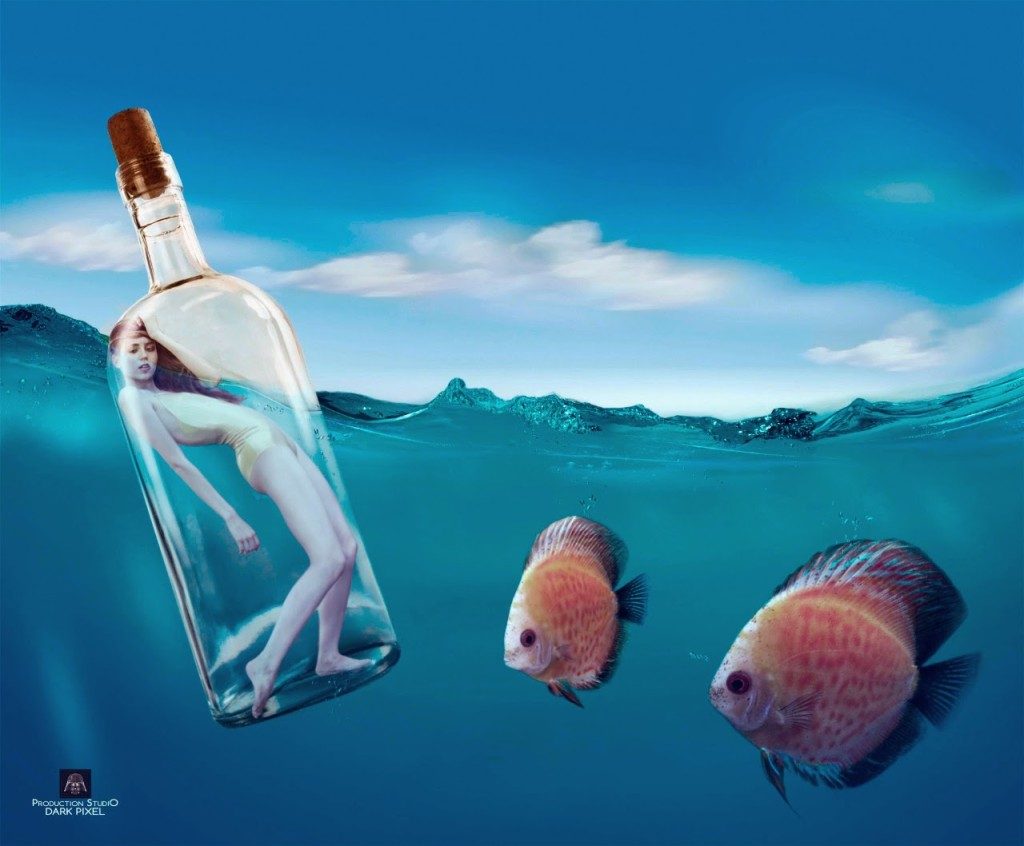 Pisces in astrology, ruled by the two fishes, receives many different ideas by various authors about its symbolism. Mostly, the dual struggle involves the earthly realm and higher reality.

The central thought of all Hermetic, esoteric, occult and philosophy subjects is that human beings are inhabitants of two worlds: the mundane we unavoidably encounter every day and another world which transcends this one and where we are not constrained.

Pisces often has a tougher time with physical existence because of such easy access to the otherworld, and essentially it alters their state of consciousness. In the Piscean arena, we are thrust into the land of the symbolic, toward a deep stratum of latent content, headlong into dreaming and shifting images on an ocean of feeling. To Pisces, life possesses many and varied meanings and they can immerse themselves in a vast sea of knowledge. We can often find such a native to possess a great and imaginative mind and their oceanic emotions contain something of the limitless, extensive and oneness with the universe. On its deepest level, this means all things are interconnected and there is something that pervades everybody and everything.

One ability of Pisces (like fish in the sea which takes on the color of their surroundings) is their talent for adaptability and along with this is their deep understanding of others. In this way, it makes for some fabulous psychologists. A Piscean speaks the language of the night and communicates this through imagery. The fish-folk often make great artists, musicians, film-makers, therapists, and can tune into all images – painting a picture of reality that captivates with its hypnotic and magical tones.

Pisces, ruled by Neptune, has a special role in the world today. It is to help others in deep need of healing; offer a deeper spirituality, and much-needed inspiration. However, a Piscean is often famous for falling into states of listlessness and feeling lost emotionally, similar to the feeling of listening to sad music. It is believed that Pisces can experience the highest prize or the greatest loss, emphasizing their capacity to reach tremendous heights and also to fall into the murkiest of depths.

The bright side of being blue and experiencing this sense of world-weariness is that it can inspire some of the most moving poetry, art, music, dance, photography. They take all of this sadness and search for some kind of emotional meaning. Melancholy is often one of their greatest drives, urging the individual to find illumination. Pisces have been called the light-bearers of the zodiac, and those born under the sign of the fishes are receptive to the tides of the collective and can shine a torch in a troubled reality.

Pisces has the largest imagination, but it must be warned – it is this massive ability to imagine anything possible that can lead to mental and emotional disorientation, escapism, and dissociation. Because of this talent to access the imaginable realm, we need Pisces to unlock the door to a magical elixir, symbolic world, hidden dimension and to illuminate the way forward. This water sign represents the secret places of our innermost being and it is well known that Pisces sees something other than reality, easily grasping the mysteriousness of the unconscious.

When we fall asleep the world disappears and we enter into  a realm of the psychic, intuitive, and a place which contains layers of meanings.  This is Pisces’ realm and they hold the creative power that was previously in ‘heaven’  and can be inspiring, with the ability to easily play the melody of our dreams and fantasies. Also, providing a shoulder to cry on and feeling endless empathy with every living creature and a compassion which is simply unmatched.