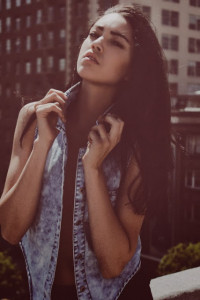 Those with Sun conjunct, square or opposite Uranus often want to express themselves through a powerful need for freedom, originality, and truth. Typically, the Sun-Uranus combination hates having any restrictions imposed upon them. The individual has a willful character and Uranus electrifies anything it touches so usually these people are modern, forward thinking and radical in their approach to life.

The aspect of free will is a heavy factor to their rebellious nature and powerful need for self-development. The Sun-Uranus person goes through life like a crazy tornado. For this type to live and feel truly alive individualism and the need to express the self and find one’s sense of destiny as described by the Sun, is accelerated by Uranus’ need to release all of that inner potential, creativity and to not keep it all bound up

Frequently, those with the hard aspects possess something of the ‘outsider’ and are usually someone that may have felt socially isolated and alienated from others. So there is a distinct feeling of being separate from family or society itself, and being prone to drastic changes in lifestyle, and the behavior of this aspect is also given to being anti-social. Uranus shows in the chart where we have to approach things differently, experiment and try something new, and this gives an exciting edge to the personality.

The Sun-Uranus person is ahead of their time, and their many gifts are in areas such as politics, science, space studies, sci-fi, and unorthodox interests. This combination often needs to shape their artistic, scientific, and social talents into something that improves the world at large Whilst these contacts love to embrace the future and follow a path that is progressive. Many times the individual is subject to flashes of genius and lightening bolts of creative inspiration, it can be difficult to ground this energy. Individuals with strong contacts between these two planets often need to join groups with a larger purpose in life.

The mind of the individual with Sun conjunct Uranus, Sun square Uranus or Sun opposite Uranus can take sudden leaps forward in their thinking and quickly see a new way of looking at life that has come through a blinding flash of self-revelation. They often take an interest in all things technical and are fascinated with the idea of breaking new ground. Whenever Sun-Uranus is interested in anything they buzz with excitement and are apt to be restless finding it hard to stay in one place. Since there is a powerful need to keep things fresh, new and interesting, but there is a dangerous side of Uranus’ path and its nature can severely disrupt the individual’s life.

Sometimes in relationships with others, they upset the bond through their uncompromising stance about being  able to live life the way they want. In fact, their partnerships probably need to also have a high level of excitement and life is usually filled with ups and downs. The individual may have experienced life events that were shocking, unpredictable and earth shattering leading them to see the world in a whole new light. It is often thought that these events serve as a catalyst and many aspects of their lives have been cut away, but it serves to remove blockages to potential growth by opening up new passage-ways.

It is common for plans to always change when one is dealt with Uranus, and personal freedom is always more important.  Sometimes this need to be free this is acted out violently and stirs up the individual’s world. The person may have sudden fall-outs, fights with authority, and be overpowering and explosive towards those they feel are controlling them. Continuous discord through the need to maintain their individuality comes across at times as being a total non-conformist. It may feel like they are the perpetual teenager against life always having to fight for their need to express their individuality and the world can feel like a constant upheaval.

The Sun-Uranus person enjoys meeting interesting and fascinating people, and also discovering that they have powerful leadership abilities. As mind blowing as Uranian people can be, they are just too far ahead of their time to ever meet with the mainstream. They can find “normal” reality really boring surrounded by images to be like everyone else is not for them.  Sun-Uranus people often attract peculiar and unconventional people into their lives who stir up  a lot of trouble. The type could also have trouble with boredom and things staying the same like a routine 9-5 job. Sometimes they show no respect for rules, the system and what is expected of them. It could be said that they are always on the verge of something new and hate to feel stifled, restricted and trapped.

The individual may appear to be openly provocative, shocking and looking for a reaction. They can suddenly walk out of jobs, leave the country, pack up their bags, and break-off friendships. But this is only done if they feel held back. When the Sun-Uranus type acts impulsively in life they leave shock waves behind them, and this bound to happen. Old ties are suddenly severed, and they can be stubborn and unsettling to be around when they bring with them shattering explosions.

When the consciousness of the individual is receptive to the undercurrents of new waves of thought, and their receptivity picks up brief snapshots of the future, they become consumed by shifts in consciousness, paradigms and the need for independence. The person is a reformer, a strong idealist if a little erratic and unpredictable at times. The Sun-Uranus type is liberating to be around, and possesses a strong magnetic personality, and there is often something unconventional in their background. They don’t get easily affected by others opinions, they are the rulers of change, fresh starts, and new beginnings.