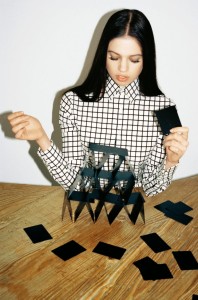 Those with mercury in the 11th house display a mind that is part of the group collective; they are part of the mental matrix and often their intellect is expressed through groups, organisations, and associations. A powerful force is ignited when people work together creating a collective pulse, collective synergy, and unity of thought. The individual is plugged into the group-mind and with Mercury here this allows the individual to enlarge their scope of understanding.

The person is focusing on improvements and advancements in society at large, and may look for intellectual groups making friends based on shared interests or a common purpose where people can come together for a similar goal. Furthermore, the person may be a mouthpiece for these kinds of organisations and be the communicative person of the group, gathering knowledge and promoting ideas. They may also enjoy being the observer, eyewitness, mediator, interviewer, or spokesperson for the group. Mercury in the 11th house enjoys debates and informal discussions and has a wide variety of contacts. Some people are met through classes, writing courses and learning situations.

The individual may be involved in group research or group mentoring, and usually learning is viewed as a place of new discovery. The individual is often very interested in what other people think and the breadth of their associations extends through many groups. The individual is looking for a cross spectrum of ideas, thoughts and views, and needs to expose themselves to all the widest form of information. The person likes to keep their mind diversified and so they prefer friends that have something to say, possessing a wide range of interests. In fact, the person usually likes to stay well informed and considers their thoughts to be advanced and well ahead of their time.

The Mercury in 11th house type may enjoy expressing their ideas about society, progression and political issues. Perhaps they have an interest in sociological, astrological or scientific groups. It can sometimes indicate a good social person that enjoys mixing and frequently gets involved with friendly activities that stimulate the mind. They may like conversing and sharing knowledge in groups, and verbally expressing where they feel the force of change, revolution and progress should take place often acting as a mouthpiece for the human race.

The person also searches for new understanding, discoveries and leaps in advancement. However, there may also be too much emphasis on group ideas as planets here tend to lose some of their individuality as the 11th house is where minds come together for the common good.  As well as being the house of networks, clubs and society at large and showing our collaborative efforts; the 11th house has a futuristic tinge and all energy applied here sets the wheels in motion for objectives and goals to be achieved. It relates to shared beliefs, ideas and attitudes, commonly referred to as collective consciousness.

When a collection of individuals first jells as a team, truly begins to react as a five-headed or eleven headed unit rather than as an aggregate of five or eleven individuals, you can almost hear the click: a new kind of reality comes into existence at a new level for human development…For those who have participated in a team that has known the click of communality, the experience is unforgettable, like that of having attained, for a while at least, a higher level of existence. By Michael Novak, The Joy of Sports

This sphere of life has a great deal to do with individual awareness and enlightenment. Prometheus, the light bringer is connected to Uranus and the 11th house. The collective mind can be thought of as invisible radio waves connecting to other people miles apart, and the person often enjoys airing their own views. Mercury here in the 11th house frequently indicates those that communicate from a distance seeking out like-minded friends, and looking for mental rapport and some common ground. The mind may buzz with ideas and they take those ideas and spread them through various groups.