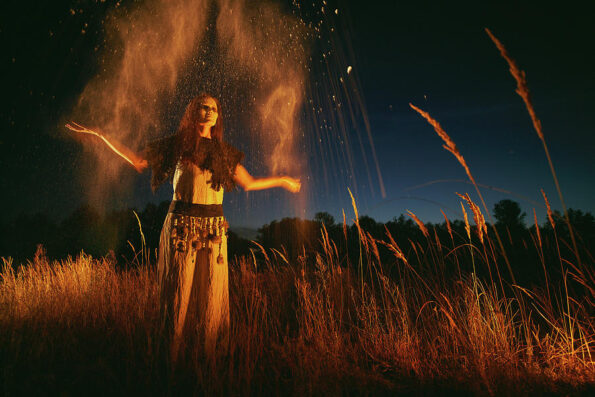 Since Uranus is part of a larger system, like the other outer planets, it can be difficult for the astrologer to fully grasp its complexity. Moreover, just as every planet in astrology has both positive and negative manifestations, we can observe the planet Uranus’ most destructive declarations in the form of revolutions taking place all over the world, many of which include bloody, violent uprising. On the other hand, we’ve seen its bright side, too, as humanity has risen from squalor and darkness to rival even the gods. Using the primary image of Prometheus the Titan to discern the source of the creative fire he stole from the gods and gave to humanity, we correlate Uranus with a wide range of mythic images and historical events, as well as individual and collective psychological patterns, both at birth and through transit.

The Greeks saw in this archetype a representation of the fundamental laws of the universe and the ultimate destiny of humanity. For astrologers, Uranus holds a special place in the cosmos, and they’ve looked into its design and astrological blueprints. Prometheus’s ordeal paints a vivid picture of the price of gaining access to the heavenly wisdom, insight, and illumination that come from the planet Uranus. Throughout the Promethean myth, he plays many roles, including those of rebel, traitor, hero, and guardian of humanity. The god’s fiery gift has come to symbolise in modern times the spirit of technology, esoteric information, cosmic knowledge, the conscious intellect, free will, political power, creative inspiration, and awareness of a wider cosmos. Just like the god whose name means “forethought,” we humans leap across time and space in search of unfathomable mysteries. People have labelled Prometheus a “cocky bastard” for taking divine power and giving it to mere mortals like us. He has a deep, abiding affection for his fellow human beings, and that sentiment is beautifully portrayed in this mythical story.

Uranus, as interpreted by Liz Greene, represents the potential to realise one’s divine heritage and one’s own godlike creative powers. The price we pay for unrealized Uranian knowledge is isolation, alienation, and the hopelessness of seeing one’s unlived potential, which is symbolised by Prometheus’ punishment of being chained on a mountain top as an eagle returns everyday to pick away at his liver. Uranian understanding must serve in a selfless, humanitarian purpose, and the Promethean/Uranian individual has to descend from the mountaintop to put such a vision into action in a way that benefits the greatest number of people.

Unless it is balanced with a solid sense of who we really are, the secrets of Uranus have the potential to shatter our sense of self-identity. To avoid being swept away by rebellious revolutionary fervour, with such an intrinsic justification of rightness, no matter who gets wounded, the Uranian urge needs to be contained by a strong ego, grounded by common sense, and possessing a sense of fellow feeling. Uranus’s varied manifestations, such as discoveries of universal design, knowledge of geometrical patterns, insights into nature’s evolutionary purpose, a valuing of movements, and group action, reveal themselves most potently in human affairs, where development is pursued with reckless abandon. Liz Greene thinks that the house placement of Uranus is where we have radical breakthroughs and “long to offer the world the gift of fire.”