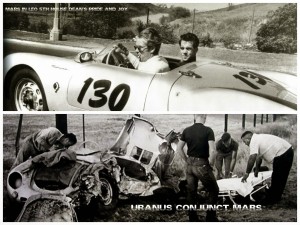 James Dean the boyishly handsome, non-conformist rebel made a massive impact in the film world, and few possessed his natural charisma and magnetism and devastatingly handsome appearance. The reportedly bi-sexual star lit up our screens and was obsessive about acting, an avid gun collector, motorcyclist and photographer. He especially liked taking photographs of himself. The young star prematurely died in a fatal car crash, and an examination of his horoscope and transits for this tragedy might offer us some answers to why such a bright flame, burned out so quickly on that fateful day.

James’s Dean was born with Uranus exactly conjunct his Ascendant.

Those born with Uranus in the 1st house can be described as having unusual and unconventional qualities, especially if Uranus is tightly conjunct the Ascendant. Since the first house represents our physical appearance as well as our personality, there may be something non-conformist about the way they dress or behave. The individual is viewed as a rebel, reformer, or highly unusual in their manners, appearance and attitude. In addition, they often enjoy being different and unpredictable. Uranus here likes to do what they please regardless of customs and norms.” Uranus in 1st House

Many times, planets rising are particularly significant in trauma to the body. Linda Darnell (Mars rising, burned in a house fire), James Dean (Uranus rising, killed in a car crash), Christopher Reeves (Pluto rising, had a significant accident and trauma that left him paralyzed). Similar to James Dean, Reeves shared a placement of Mars in the 5th house but in the centaur sign of Sagittarius and was entering a horse race competition when it happened. Quite often planets are also transiting the 1st house when an accident by death has occurred. Also, the rising planet may be active in transit at the time of a trauma to the body.

Always a daredevil, James Dean’s pride and joy was his silver Porsche Spider which he nicknamed “Little Bastard”. On September 30, 1955, he was out for a spin – driving at 86 miles per hour – when at 5.59PM. His car collided with another vehicle at the intersection of Routes 41 and 466 near Paso Robles, California. His passenger, Porsche factory mechanic Rolf Weutherich, suffered a broken leg and head injuries; the driver of the other car, David Turnupseed, was only injured slightly. In the crash, Dean’s head was nearly severed from his body. A few hours earlier a police officer has cautioned him to slow down and issued a speeding ticket. Dean had been heading to a sports car rally. Reportedly, James Dean’s final words to Rolf Weutherich before the fatal car smash up were regarding the oncoming car: “He’s got to see us.” James Dean died when the Jupiter-Pluto conjunction was in the sky symbolizing large forces at work, things done in a big way, and an ego that can expand with desire for power and control. The Jupiter-Pluto conjunction which opposes his Sun (self) can also indicate an energy that massively increases, but it can also create a lack of balance.

Under the Sun-Pluto transits some part of our life changes and nothing stays the same. Sometimes it happens suddenly, and the proverbial rug is pulled out from beneath our feet and all sense of security is lost. It may be a long drawn out process and our life changes completely by the end of the transit, or it is our identity that alters significantly.”… Sun-Pluto transits are active when there is a life threatening situation or a major crisis looming… It could be a death in his life touching him to the core, changing him dramatically, and he may not the man we knew before. It is not uncommon for others to remark to a Sun-Pluto transit person that they have undergone a personality change and this could be a positive or negatively perceived one… Birth and death itself is viewed as the snake shedding its skin, and to die is like changing one’s body or sloughing off one’s skin. Death is a transition development process, and throwing off of the outer physical body. Sun-Pluto Transits

Transiting Saturn was in Scorpio and on the cusp of his 8th house of death. Saturn in transit represents those obstacles in our way, and can signify a time we will meet with opposition or resistance. When a personality is reckless, racy, and rebellious they don’t take kindly to being thwarted, and they aren’t adaptable. Liz Greene comments that the Sun in Aquarius (fixed) and the reforming energy as is seen in James Dean’s chart, doesn’t work when you try to change him. A Saturn transit can hit hard in this sense and authority and law enforcement (Saturn) warning him to slow down and also disciplining his actions fell on deaf ears. Under Saturn we are always held responsible for our actions, and it’s the inner pressure to “do the right thing” often Saturnian types and even those predominately ruled by earth can sail by such transits, but a personality that hates such limits enforced on life will often try and break down those barriers. The whole configuration and T-square energy of his natal Sun in Aquarius and Jupiter-Pluto in Leo and Saturn in Scorpio always gives us a feeling of the unalterable and lacks flexibility.

Also, transiting Uranus, which rises in his horoscope, formed a conjunction to Mars. Uranus-Mars is an indication of accidents and the energy can be erratic, and there is a spontaneous, impulsive and potentially rash desire. Mishaps, highly competitive nature, and a fresh vibrancy surround the individual under this kind of energy. It is called the hasty and reckless transit and it can lead to sudden calamity and is actually one of the aspects that astrologers constantly warn clients about carelessness when driving. The uncompromising nature, volatility, and willful extremes can prove disruptive and also explosive. The Mars in Leo in the 5th house placement (pride and joy) indicating his hobbies were fast cars and entering into competitions – Mars) took the brunt of the Uranus transit. James Dean was only 24 years old when he died, but his legacy has significantly outlived his actual life-span.