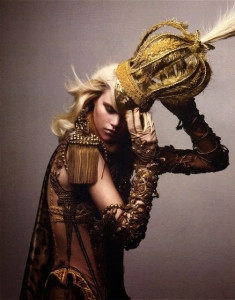 Leo comes to life with an inner confidence which exudes from him into the environment. It is this quality which inspires people to place their faith and trust in him. If confidence turns to vanity, however, Leo will find that others will just easily turn away. Leo is not an insecure Aries, an evasive Taurus, a jumpy Gemini, a fearful Cancer. He is Lord Leo the Proud (unless of course, he happens to be Loafer Leo the Cowardly, an equally numerous species of feline). He is determined to success, to rally everyone under his banner. His project is everyone’s project, his likes are everyone’s likes, his enemies are everyone’s enemies. You must side with him in everything or you will fail to prove your loyalty, a capital crime in the State of Leo. Alan Oken’s Complete Astrology: The Classic Guide to Modern Astrology

And like the king you don’t take criticism well. You see nothing “constructive” about someone pointing out your faults. As far as you’re concerned, a naysayer just wants to ruin your day. This is when the children of the Sun get very imperious. You’ll adopt a “take it or leave it” attitude about your performance on the job or at home. You aren’t ambitious in the ordinary sense of the word. You see ambition as declasse. Ambitious people are just out for themselves. Needy, grabby, and hopelessly dissatisfied, they’re driven by what’s lacking in their lives. You don’t see yourself as lacking anything. This isn’t to say you’re perfectly happy. There’ are plenty of things you’d like to have or hope to achieve one day. But the difference is that you see yourself as constantly moving toward your golden age. If you don’t get what you want today, there’s always a chance you’ll get it tomorrow. Even when skies are cloudy and gray, your Ruling Planet, the Sun, never deviates from its path. Ruling Planets: Your Astrological Guide to Life’s Ups and Downs

It would sometimes appear on the surface, that Leo needs approval and affirmation from others, whereas Aries doesn’t give a damn. With Leo potency the world outside may not be that important. Obviously we have some glaring historical exceptions, such as Napoleon. On the surface he seems to be an exception. But in the main, for Leo, it isn’t a question of feeling potent; it is a question of feeling unique. These are not the same thing. Leo’s need is not focused on beating the competition. In many ways Leo is not competitive at all. Other people simply aren’t important enough to be considered competition, because Leo’s dialogue is really between oneself and God. This is reflected in the need to experience oneself as having a destiny, because an individual destiny implies that there is some divine power which says, “You’re here for a special purpose; you are my favoured child.” This is the core of the hero myth. The inner feeling of being chosen, of being the divine child, is a fundamental aspect of Leo’s defence against extinction or ordinariness. Barriers and Boundaries: The Horoscope and the Defences of the Personality

The Solar Path involves active, conscious participation, or the use of one’s own will and understanding a cooperation with the Divine. It includes the fiery zeal of Leo-the courage of the Lion who goes forth independently and takes risks, who fearlessly faces the adventure of life and makes mistakes, willing to accept the “lion’s share” of responsibility for them. Several Leo clients have been drawn to Jung and his psychology of individuation. Jung himself was a Leo and found the inner quest of the individual for wholeness of particular fascination. To be all we can be, “to strip away the layers of the onion and to get to the core of who you are,” he once said. That’s a quest worthy of Leo. So this is, indeed, an important sign. If Aries was a doer and activist, than Leo is a becomer- personality in the process of becoming himself. It was Apollo the Sun God who brought spirit to man. Leo has spirit. It’s like the song, “You’ve gotta have heart, lots and lots of heart.” Archetypes of the Zodiac (Llewellyn Modern Astrology Library)

No astrologer, I think, would argue that this quality of fiery passionateness is characteristic of Leo. But the lion is the stage in a process, as Jung suggests; and it is this process or pattern which brings us into the sphere of the ‘fate’ of Leo. It would seem from what I have seen of the life histories of Leo’s with whom I have worked, that there is an alchemical work to be performed. The lion is not permitted to remain in his bestial form, but must give way to something other. It seems a disturbing aspect pattern that Leo is often treated, as Jung describes, with the circumspection ‘proper to the jungle’, or with the methods of the animal trainer’-the whip and the goad. This is a painful process for Leo, whose childlike heart is deeply injured by the reactions of his fellows to his own excesses. He ‘meant it for the best’, but somehow others do not seem to be appreciative; they are more often angry. If Leo himself does not glimpse the importance of the process, life tends to teach him rather forcibly that a lion cannot roam loose among men without some retaliation. Astrology of Fate

In the big, broad, colourful world in which Leo lives, the intrusion of the small and the banal are not welcome. Leo needs to paint this canvas, with large, unrestricted strokes. Wherever some new, original idea is needed, wherever an impact must be made, wherever some new creative possibility can be envisioned, there you’ll find Leo. Freddie Laker is a characteristic Leo. Who would that one man, without the enormous funds and hierarchy of the large airlines behind him, could have succeeded in setting up his Sky train service with such flair? Notice the ads for his flights. Often you get to see a picture of Sir Freddie himself, smiling and promising his customers the best possible service available. There is the Leo touch: the personal stamp. No cold, impersonal photo of a big, powerful plane as you find with commercial airlines. No, you get to see the man himself. A little exhibitionist? Of course. But that’s part of Leo’s charm, too – the more distinctive and individual he can be, the happier he is. Some Leos carry this to the most outlandish extremes. Napoleon, for example, wanted to conquer the world. But you’ll notice that wherever it’s said that something can’t be done, there you’ll find a Leo determined to do it. Astrology for Lovers