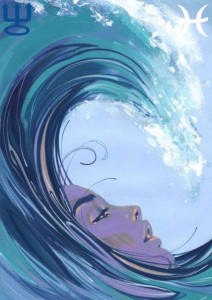 If everybody is wondering about Neptune in Pisces’ meaning, it has already been underway and, thus far, is proving to be something of a submerging, and even nebulous ride. In Astrology, Neptune rules idealism, altruism, self-sacrifice, empathy, kindness, compassion, and fantasy. The boundless, azure planet, urges us to transcend everyday reality, to bring it into a more transcendent place where nighttime wishes soar and everything feels infinite. What do we expect from Neptune in Pisces, in reality? We want the great dream catcher to take us away from this harsh world and plunge us into beautiful scenery, music, dance, poetry, photography, expanding upon everything we refer to as beauty and love. Truly transporting us into waves of feelings, love from above. Neptunian energy pouring forth will inspire and move us into transformation.

Neptune is related to the god Poseidon – ruling over shipwrecks and drowning, controlling the motions of the dynamic sea, stirring us within, with tides unpredictable. The massive ocean remains the last great frontier of Earth. Its realm is so vast and so difficult to access, it would be completely sublime if this watery realm whispered some of its oceanic secrets. Water is home to an infinite number of strange creatures and bewildering phenomenon. Let’s just say, Neptune in Pisces takes us into the mysterious, mythical, and everything in-between. The ocean, in fact, is 95 percent unexplored, unknown, unseen. Isn’t that surreal? So this is usually what astrologers speak of when we talk about the ‘mystery’ contained within Neptune or Pisces.

Neptune in Pisces takes us into anything involving these archetypes and is bound to take us into the deepness of the unfathomable, unexplainable, obscure depths. Furthermore, it calls to mind the lost city of Atlantis, one of the greatest unsolvable mysteries about a sunken world, idealized as a Utopian civilization holding wisdom, lost in the mists of time. The Bermuda triangle also brings up Neptunian themes (and we have had a disappearing plane with lost communication – MH370, its wing has been found by an island and it has been called a mystery of the ages.)

Neptune in Pisces also prompts us to think of a Tsunami, a big wave caused by a catastrophic event, tidal and seismic sea waves. A Tsunami occurred in Japan with Neptune at 29 degrees (critical) of the previous sign – Aquarius, about to enter its new sign of Pisces. Not all the way into Pisces, but there has always been something striking about a planet leaving and entering the astrological signs. There has also been With Neptune transiting through Pisces there has been Hurricane Sandy, which began as a tropical storm in the Atlantic Ocean. When people get angry, we may stamp our feet and shout, but when the gods are moody, they cause earthquakes, hurricanes, and tornadoes. Flood stories and ship tales have abounded with flooding in Thailand involving thunderstorms lasting 5 hours with the ground being lashed with rain.

Many people believed that the Mayan Calendar marked the end of the world when the calendar stopped. The date that was believed to correspond to the end of the calendar was December 21st, 2012. There was a faction of people who actually believed that this date would mark the end of the world. It was a much-discussed topic in social media, news sources and there were even television specials dedicated to the topic. The world did not end, and there were no catastrophic incidents to report. Some people may feel Neptune in Pisces has been overshadowed by the Uranus square Pluto transit, and in some ways, it probably has. Without a doubt, though, there will be more in store from Neptunian waters, culminating in 2026. With all the violence in the world coinciding with the other big transit of Uranus-Pluto, one can almost welcome Neptune’s gigantic flood, wiping out the whole world, cleansing it of its hatred and starting over.

Neptune is most at home in the depths of our unconscious mind, and, to the extent, we immerse ourselves in our inner world. Neptune rules the large sea that Jung thought represented the unconscious. All forgotten experiences, wishes, and subliminal memories can be recalled from this area through dreams and fantasies. But are we feeling the spiritual as a collective? I am not sure if it’s been a wholly enlightening experience so far, but as Karen Carpenter would sing, “We’ve only just begun.” In the previous Neptune in Pisces experience, everyone was literally touching the invisible, there was also a lot of deception occurring. On the whole, the spiritual swept through this time. During this current Neptune transit through Pisces, however, are we really looking for our minds to expand into the otherworldly? Are we searching for doors left unlocked? Are we waiting to hear spirits tapping on the wall?  Neptune in Pisces adds ethereal undertones, clairvoyant, intuitive, instinctive, and mysterious melodies. This enchanting planet rules the subconscious, the psychological, and all things hidden in the mystical realm.

The other two outer planets Uranus and Pluto forming such a dynamic square aspect at this time has been a violent awakening. I am not sure if part of the world has lost its humanity, its oneness? We desperately need a miracle right now, some sign of glimmering hope sparkling in Neptune’s waters.

Update: In 2020, Coronavirus is spreading around the world. Could this be due to Neptune’s transit in Pisces? I think it was Charles Carter who indicated some of the watery elements for the cause of a pandemic. Whatever the case, this period is changing us on many levels, and it has felt very strange towards the end of this cycle of Neptune, but let’s hope something transformative happens at the end.

Neptune in Pisces will transform the collective consciousness to create a more harmonious relationship between all human beings and all groups of which they are a part. Astrological Secrets for the New Millennium