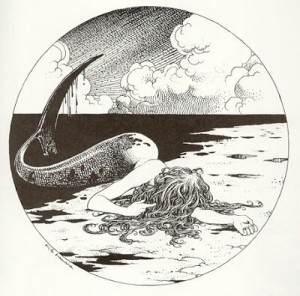 The question is: how do you find this placement? It seems as though the mind is trying to surface from the depths of the ocean and enter the rational. My feelings and thoughts are difficult for me to convey in a clear and concise manner. What are your thoughts?

What a wonderful way to describe such a position of Mercury in the 12thhouse of the chart, and it feels exactly like this description. The fight, as well as a general sense of disorientation, within the realm of communication. Mercury must struggle and stumblingly make its way through the water. It has the potential to make you extremely sensitive, to the point where all you want to do is dive into your own internal ocean. It can bring about a significant lack of self-assurance and push you to the breaking point, where you want nothing more than to hide away in your own world.

You may have had the experience of being verbally bottled up, just like Ariel in “The Little Mermaid.” This feeling may have been the most vivid for you. The uncanny similarity to a fish trying to communicate while it is on land seems to echo how frustrating it can be to try to convey how you are feeling. Mercury’s placement in the 12th house indicates that you have the freedom to express it in any way that feels authentic to you; however, in order to do so, you will need to find your own voice. Writing has been a form of catharsis for many of us who struggle with communication; for others, it may be an outlet for expression through art, photography, or other Neptunian fields.  If it’s any solace, astrologers have assured that you have a vivid and powerful imagination, so there’s that.

According to Donna Cunningham:

The inability to communicate and the feeling of being misunderstood are miserable to live with, but like all skills they get better with practice. The alcohol treatment center where I’m teaching astrology takes communication very seriously, because they know how handicapped their patients can be without it. One of the most intense class sessions we ever had was about Mercury. When I had presented the basic idea, the students got involved in a very heated discussion of the problems various class members had in communicating. In order to analyze the problem an individual has in this area, you’d look at Mercury and its aspects and also the third house and any planets in it. For example, one of my students at the center has Mercury, Mars, and the Sun conjunct in Aquarius in the twelfth house. He is bright, but has a great deal of trouble getting his ideas across. Then, too, he’s a rebellious nonconformist who is angry with society for not living up to his ideals. His thoughts center on past injustices, and he’s unable to look at the part he plays in his own trouble. Out of resentment and disappointment, he began drinking heavily.

When you figure out the best expression—perhaps one that is medium for Mercury in this most sensitive of houses—things move along much more smoothly. Tune into those deeper insights, and blow us all away with what you are really able to communicate with the rest of us, as you will most likely run into trouble trying to express this kind of Mercury in a way that is too superficial.