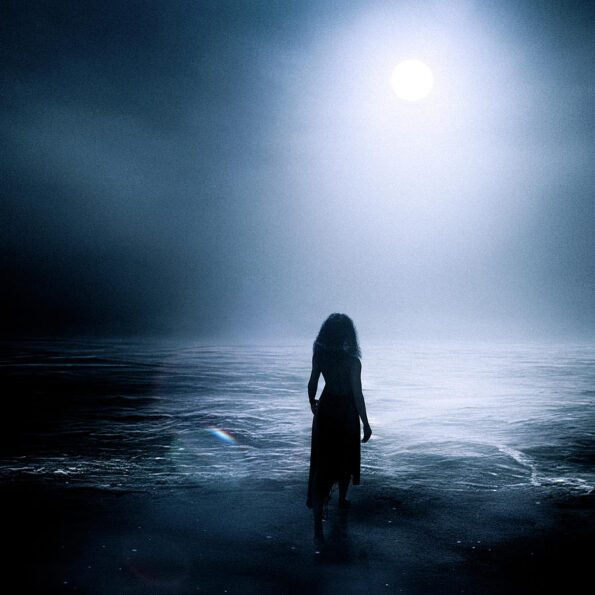 Those who have the Moon in aspect to Neptune, either as a conjunction, square, or opposition, tend to be highly perceptive, compassionate, and empathetic. Without well-defined borders of protection, the person is vulnerable emotionally and can be easily drained by exposure to negative energy. It can feel like the floodgates are about to burst open for a Moon-Neptune, who is often left feeling unsatisfied, alone, and melancholy because of their overwhelming emotions. The individual is susceptible to strong emotions and mood swings that might come on rapidly in a tidal wave of feeling and then seem to float back to their original source. In addition, they may play the victim card too often, wallowing in their own self-pity while displaying classic victim traits such as passivity, dependence, and helplessness; doing so will allow them to open up to those around them, but also puts them at risk of being exploited. On the other hand, they are capable of experiencing euphoric, out-of-body, fantasy-realm emotions and escaping into a world of blissful daydreaming and universal oneness.

Moon-Neptune needs to learn how to be less dependent on people emotionally and to stop being so anxious about how their actions will affect those they care about most if they ever want to achieve their goals and pursue their passions. Since the only person they’ll hurt by caving in all the time to avoid conflict or being too sensitive to the feelings of others is themselves. Moon-Neptune people need to be clear if they are acting for themselves or unconsciously tuning into the needs of individuals in their immediate surroundings, thus it’s crucial for them to thoroughly convey their own needs, wants, and desires. The Moon in aspect to Neptune makes a person highly adaptive and empathetic, but it also gives them a strong desire to retreat from life, so when they’re feeling particularly sensitive, they may withdraw from others by not answering the phone, not leaving the house, and not engaging in social activities. Oversensitive people often have a hard time dealing with the stresses of daily life because they are so delicate and sensitive, thus they may utilise various tactics as an anaesthetic, such as consuming excessive amounts of television, music, or art.

As a result of their need to please everyone, people born under the Moon-Neptune axis are commonly misunderstood as emotionally unstable chameleons. Moreover, they have a hard time separating oneself from others and defining who they are, but they also have a tendency to drift away from people when they feel the need, so they may never fully achieve a proper balance between being with others and safeguarding the self. While many Moon-Neptune natives may initially appear to be rather fragile on the inside and struggle with daily life before learning to cope in healthy ways, they eventually become quite skilled at finding ways to recharge themselves and soothe their tumultuous emotions when they need it. People with a strong Moon-Neptune aspect are also highly vulnerable to the wounds and criticisms of others, and when times are bad, they may seek solace in temporary escapes like alcohol, sleeping, or getting high. When Neptune is in aspect with the Moon, it can heighten a person’s emotions to the point that they lack clarity and sound judgement in romantic situations; when reality fails to live up to their expectations, they may retreat into a dream world as an alternate reality; and when their emotions become sick with sadness, they may need to find a way to heal so that they no longer cry heavy, continuous sobs.

Moon-Neptune contacts thrive when they have the freedom to dream, design, and inspire others through their own unique creative processes. They excel at using symbols, pictures, and images to create a connection with the public and have a positive impact. This quality is associated with the individual’s ability to express themselves creatively and spiritually, making it a good fit for the film, art, or photography industries, and making them especially effective in the helping professions. Someone with such perception may be unknowingly operating at a whole different level. The Moon-Neptune personality type has the potential to be all things to all people, making them excellent carers who are also highly attuned to the subtleties of the spiritual world. Maybe your mother’s side of the family is full with dream interpreters, mystics, and tarot card readers. Maybe weird things happened at home, like a psychic phenomenon. The Moon-Neptune personality craves the fantastical and the dramatic, and they can’t stand a life of grey, hard reality. Characteristic traits include a strong drive for perfection and an idealistic belief that everything can and should be improved for the greater benefit.

One woman with the Moon conjunct Neptune had a paraplegic father and she felt her mother didn’t really love him. She believed that if she could give her father enough love, she could somehow heal him – that was the myth she carried around in herself. She felt that there was this magical person hidden in the father’s wounded body and that if she loved him enough and never abandoned him, she would make the father healthy and whole again. Among other things she read the Electra myth and also “Beauty and the Beast.” She had this idea that her feminine love could save or transform the wounded man. Through the Looking Glass