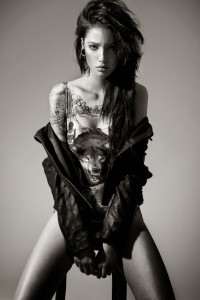 The 8th house in astrology deals with the aspect of self-confrontation and often involves a method of self-investigation and deep analysis. It is the place where we hold up a “psychological mirror.” The process of analysis involves the need to ‘dig up the old stuff’. Commonly the 8th house rules over psychology, and those with Pluto heavily aspected, Scorpio and/or 8th house planets in the natal chart are often masters at drawing out the secrets of others. When we enter into this deep and dark realm we quickly come to realize that it represents how we handle all the deep stuff.

Many people argue over whether we should go stirring up what is down below, maybe we pushed it down for a reason. Perhaps we should let sleeping dogs lie. However, it is here where life demands that we give an open, honest and psychological approach to the issues involved.

Many times we are left with little choice but to confront what has been suppressed in the personality, and these meetings usually occur with the more disturbing aspect of the self, and it can be fraught with painful encounters. It takes an individual on a journey through their shadow self, delving deeper into the darker levels of the psyche. In addition, it contains the parts of us we have repressed, denied, and rejected. For the most part, this involves our wounds. It is the place of emotional scarring and it is in this area where we transfer baggage onto partners, hoping they will heal us and take some of the load. The 8th house rules over intimate partners, sex and involves the sharing of resources. More profoundly, it involves the sharing of feelings and represents all of our deep vulnerabilities, insecurities, and fears about entering into a relationship.

When we join forces with another we bring together individual values and past experiences. A common appearance is made by the blocked off emotions that appear in the arena of the 8th house and in the area of intimate relationships. Emotions that have been ignored, but are still bothering us and screaming out to be heard. Usually, these volcanic emotions come out in fits of rage, through personal conflicts and self-destructive behavior. Often these unconscious feelings surface and the person will subconsciously be driven to try and provoke an argument, create a scene, make trouble in order to unleash all of those powerful feelings – the ones that have been sitting underground  and often involving: domestic abuse, sexual mistreatment, power and control, manipulation and neglect.

In psychology, it is believed that feelings laying dormant in the personality search for a stage to act out upon. When we witness those close to us acting self-destructively, involved in a violent relationship, acting out angry feelings it is like waving a red flag in our direction indicating that deeper problems are at work. Many times, it is these toxic states of emotions that need to be exorcised, so that we don’t have to act out compulsively, violently or obsessively.

As uncomfortable as it may be to recognize we can provoke violent emotional outbursts in others because our own feelings are too threatening to deal with.  Thus, these powerful emotions control us from within. The 8th house is a foreboding place where our fears and wounds gape. Our emotional landscape within this realm is like a minefield that goes off immediately when it is tripped. Therefore, it is by the letting go of old emotions that helps the person to evolve, grow and change.

Plutonian people want to remain as hidden as possible and in the shadows, unrevealing. Sometimes they close off because of overwhelming life experiences/early trauma and they get trapped under the “psychological debris” and block these aspects of the mind as a way of surviving. Pluto, Scorpio, and 8th house planets all rule over trauma, and can often be descriptive of events happening to us that filled us with fear, helplessness or horror. We may hold a lot of guilt and question whether we could have changed events. Did we let it happen? Could there have been any action big or small that could have changed what occurred? An early traumatic and a deeply wounding event can haunt us through flashbacks, nightmares, thoughts and memories associated with it.

The act of releasing all blame, shame and responsibility is akin to throwing a piece a paper into the fire. By letting it go up in smoke, there is an immediate sense of lightness. It is through Pluto, Scorpio and 8th house planets that people develop psychological healing, psychic gifts of a profound kind, using their insights to help others shed light on areas of life they refuse to see. Psychology brings things to the surface to be healed, and in doing so, loses its power over the individual. In fact, the 8th house could be termed the house of ‘unfinished emotional business’ since it is a water house. The emotional wounds that keep us stuck in a cycle of unhealthy relationships and involves emotions such as jealousy, anger, hatred and fear. Instead of feeling powerless over the force of such emotions we need to regain power.

Pluto and the 8th house rules over what gets handed down to us by our family. It also represents the kind of baggage that keeps us chained in unhealthy patterns of abuse, addiction, and difficult relationships. Most people have unresolved conflicts from childhood, some to a greater degree than others. When we lose the baggage of childhood we feel lighter and possess a new sense of freedom releasing us from the bonds of the past. The feeling of coming out the other side again – alive. Pluto blockages in the personality, if left unresolved, will manifest in compulsive behaviors and show up as depression, relationship conflicts and panic attacks. It often comes back through events provoking the individual to look deeper into the soul. Many times the person is compulsively drawn to situations that re-create earlier traumas.

A venturing into the underworld of such emotions is the goal of transforming consciousness, and Pluto’s lower level of life described as the bowels of the universe. It is also imaged as the Dark Night of the Soul, the abyss, the coldest winter and the black labyrinth and its soul purpose is to help us emerge as a person reborn. It often it involves slaying the dragon, a term used to describe an individual battling with inner demons such as chemical addiction, depression, violence, and another person. The journey through the underworld that often occurs through major transits of Pluto in the natal chart involves these destructive complexes: If the intimidating, abusive, possessive individual appears outside it is usually symbolizing something that is stopping us from growing on the inside.

The self-destructive nature of Pluto, Scorpio, and 8th house planets seem to be rooted in something far deeper than one can fully understand. In many studies, it has been found that a high number of sexual abuse victims self-mutilate, and so many times it links back to something in the past that is still hurting us. Self-harm, suicide, addictive and compulsive tendencies are all methods of self-destruction. Often, defense mechanisms of Pluto involve shutting down, feeling numb, and becoming withdrawn. The self-protective energy forcefully put in place can painfully isolate the individual. When feeling wounded the common way to deal with it is to retreat, isolate oneself and look deep inside.

Many times Pluto/Scorpio’s emotions (fixed, water sign) have been described as an iceberg, and just like the glacier we only see parts of an iceberg on the surface, but there is a whole lot more going on underneath. Sometimes the icy strength of the Plutonian  – masks the depth of emotions lurking below. This is why confronting a Pluto person needs to be done carefully as the enormity of their emotions is invisible to others. An iceberg is much larger than it appears to be. The individual will be struggling with a host of emotions from jealousy, hatreds, anger, turbulent passions, shame, resentment, and humiliation. Beneath the surface of a Pluto person lies a mountain of pain.

Jealousy in relationships, circles around the fear of abandonment, another Pluto issue. It has a great deal to do with loss, humiliation and betrayal – all of the things feared. The feeling of jealousy also produces pain, drama, and tragedy. It relates to hatred, murder, and suicide, and all of these terms are familiar with what we know about Pluto, Scorpio, and the 8th house. The more overwhelming the trauma from the past and the amount of time emotional wounding has been left unresolved – it usually means there is a more extreme type of jealousy that occurs. In the natal chart, Pluto rules what is called hyperarousal and its a state of fear, that puts the person on hyper-alert at the sign of danger. Everything in the 8th house is felt more intently, passionately and violently.

Wealth of the Underworld

A psychology joke that fits in well with Pluto’s area of growth goes like this:

How many psychiatrists does it take to change a lightbulb? The answer: Only one, but the light bulb must genuinely want to change.

Inside of us, we have this mysterious, spiritual, eternal self that holds all the treasure, wisdom, and gold we need. We can’t demand that our shadow leaves and we can’t force growth, and heal wounds overnight. It takes a long time to even see a speck of gold during the process. Pluto in mythology, is connected to Hades, Lord of the Underworld. He rules over wealth, the kind that is earned through digging deep. If it wasn’t so valuable it wouldn’t be as hard to find. We usually have to go through hell, dig through dirt and a lot of shit before we reach the light, and is not until the Pluto person learns to heal themselves of emotional wounds and release the shadow that they are able to help others.