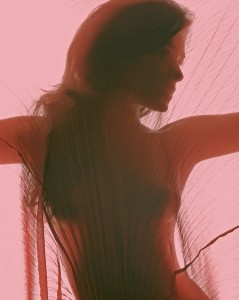 Venus in Aries seeks the ongoing challenge of relationships and enjoys competition in love. Venus is represented as the force of attraction as well as love and beauty. Love is often direct and uncomplicated with this type, and they make impulsive, idealistic, and passionate partners. Those with Venus in this position have a reputation for falling in lust and love fast. They have little time for the subtle approach, preferring things to happen now.

Venus in Aries is the most impulsive of all the Venus signs, leaping straight into relationships. These people are usually attracted to those who have a strong sense of self and with a nature as deeply passionate as their own. Although capable of deep loyalty, they need independence in relationships and have to balance this out with sharing and cooperation. Venus here has a Don Juan reputation in both sexes, the famed seducer of women; they conquer through love-affairs as a way of feeling potent.

When Venus is placed in a fire sign, it often shows dramatic, exciting, and fiery expressions of love. Venus rules love and marriage as well as harmony and the ability to attract. Relationships signify the capacity for affection, friendship, sensuality, and sexuality. Those with Venus in Aries are drawn to people who have an aura of independence about them. The individual is not willing to compromise and can sometimes find arguing and conflict highly stimulating. Venus in Aries does not like to be controlled in a relationship. They will love who they want when they want, and how they want.

Always on the lookout for new challenges, and new experiences – there is excitement and thrills found in the first throes of passion. This placement of Venus may mean that love has to happen quickly, and in a relationship, there is a need to be number one; they will not be thought of as second best. Venus in Aries values independence, freedom, assertiveness, and there is a childlike spontaneous quality to love. In love, they hate to feel tied down with responsibilities. Being idealistic, they seek new opportunities for self-discovery through others.

Venus here is usually a trendsetter and likes to try new styles and fashions before anyone else. Venus in Aries also has a tendency to fall in love at first sight and likes to take the initiative. Those with Venus in the speedy sign of Aries usually know whether they like someone or not right away, but loses interest easily if there is no real challenge. They feel excited when they arouse the intense passions of others. However, they’ll tend to place their own romantic needs first. This person likes to make the first move but also likes others to be just as confident and self-assured in relationships.

Love is viewed as an adventure, and they like a new romance when the old one loses excitement. A long-term relationship is always on the cards, but the fiery passions need to be kept burning in romance; they must be able to do as they please.

Venus in Aries person can be extremely passionate and involved. They seem fully committed through displays of intense, passionate energy of a very creative nature which keep the relationship moving forward. On the other hand, the Venus in Aries person will cyclically withdraw this energy when they feel that they have become too involved, too caught up in the relationship in such a way that their need for independent actualization of their sense of a special destiny is threatened. The instinctual trigger for this cyclic withdrawal is often when they have become too enmeshed with the other person. The other person will then feel totally deflated and confused, angry, and become intensely confrontational by way of projecting their own insecurities upon the Venus in Aries person. Pluto, Vol II: The Soul’s Evolution Through Relationships