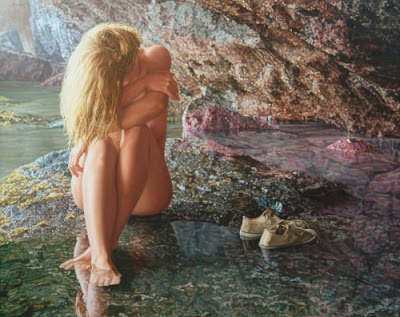 When Saturn is conjunct, square or opposite Neptune in the natal chart, it helps to ground the inspirations, dreams and longings into some kind of practical form. The immense creativity, imagination and symbolic life of Neptune is anchored by Saturn into something tangible. However, Saturn can also repress, frustrate and block the inner chaotic world of Neptune, leaving the individual with a feeling of isolation, challenged in their ability to express their aspirations in life.

The combination of these two planets is commonly linked with sacrifice, duty, and suffering from feelings of guilt. Inadequacy and a feeling of depression are common when one cannot live up to their ideals. The planets combine the yearning for higher meaning, unity and connection associated with the watery realm of Neptune, with the forces of separation, boundaries and concrete reality related to Saturn. Sometimes they have a sinking feeling they have lost something precious or irreplaceable. A sense of hopelessness that makes it incredibly hard to connect to a higher source for a spiritual refill.

Neptune has a talent for putting its finger on collective feelings. Poets, artists and writers are all challenged to create something and offer their gifts to the greater whole. We may treat Saturn’s influence in the chart as a need to be an authority in some area of life. Saturn-Neptune might be drawn to artistic and creative areas, leaving a lasting achievement in the imaginative realm. Similarly, the individual may feel pulled towards healing and medicine, charity work, or spiritualist matters.

There is always a danger with Saturn-Neptune aspects of drug and alcohol addiction in an attempt to fill a spiritual void. This was stated in Liz Greene’s Neptune and the Quest for Redemption. A reliance on alcohol provides a loss of control or escape route from the hard task of responsibility and having to be in control. Saturn conjunct, square, or opposite Neptune can be fearful, anxious, and full of phobias. Saturn-Neptune is commonly known as the “sickness” aspect and so systematic ailments can occur. Tiredness, lack of energy and illness can thwart the individual from achievement. When the type wants to be practical, grounded and realistic they can be lost, undisciplined, and unrealistic. It can cause problems on both a physical and psychological level.

Saturn-Neptune: When these two are in conflict, feelings of separateness and isolation tend to negate one’s connection to others and the collective whole of humanity. Often there seems to be an unbridgeable gap between one’s dreams and visions and practical reality which may be felt as a gnawing sense of exile: being far from where one belongs and wishes to be. Essentially, this conflict poses a spiritual challenge. The image of the divine is wounded – the feeling is that God doesn’t exist or is entirely indifferent – and may give rise to a ‘job complex’, a sense that one is left out, a victim about whom no one cares. This in turn may cause bitterness and indifference to others’ hurts and needs. Character and Fate: The Psychology of the Birthchart (Arkana’s Contemporary Astrology Series)

Wherever Saturn is we feel insecure. Neptune will try and erode our natural protection, defenses, and armor, making the individual feel vulnerable to outer currents which threaten everything they have worked so hard to build up. They watch helplessly, as it all falls away into nothing at all. It’s like buying a house only for it to flood. Perhaps a part of the individual holds onto guilt about achieving something substantial.

Neptune tends to undermine what Saturn has worked for, and many times they can be left feeling dissatisfied and struggling with what goals are realistically achievable and what are just pipe dreams. The individual may have had to face hard reality with extremely difficult choices to make and may have given up their cherished dream. A Saturn-Neptune type may often find their dreams challenged, criticized, and harshly received. However, art, music, drama, or some other Neptunian pursuit can be made into something real. Long-held dreams are accomplished after much hard work and the individual realizes that it wasn’t all just a dream.