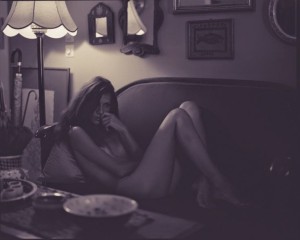 The 4th house of the chart relates to nurturing and security. Here the longing to be protected by the unity of life (Neptune) is extremely powerful. It is a  longing to remain in the comforting arms of childhood, and if there are trines to a 4th house Neptune, there will often be an all too comfortable feeling of emotional well being. Many times the difficult aspects to Neptune usually mean there is a nagging discontent at home, and perhaps a feeling that things don’t live up to their ideal picture of home and family

When Neptune is in the 4th house it is placed in the personal space of the horoscope and represents the inner feelings of the individual. It also has a linkage to the past, family, and close relatives. So, when the hazy mist of Neptune surrounds the home (4th), the early roots of life don’t always provide a solid base. This can reveal itself in a variety of ways. Often the home can be chaotic and disorganized, especially with squares to Neptune. It can, therefore, be challenging to create the sea of tranquility often longed for. The formative years are sometimes colored by a great deal of confusion and it’s difficult to see a parent in a clear, realistic light. Frequently, there are deep, emotional, and nebulous feelings surrounding the father, or the childhood is veiled in some way, which may only become clear in later years.

In An Astrology Book for Beginners it says:

With Neptune in the 4th house, there will be strong unconscious emotional ties to the home and family that are karmic in nature. People with Neptune in the 4th House often live near water and have strong feelings for the land and nature. Family secrets and mysteries surrounding aspects of home life are common. These people have a deep desire to mother the world and often bring strays and strangers into their homes. An afflicted Neptune can cause confused family relationships and a chaotic domestic environment. Neurosis from difficulties with parents and other family members can arise, and emotionally based nervous disorders that are difficult to diagnose may develop later in life.

Ultimately, Neptune in the 4th house will search for the ideal home they wish they’d had or believed they’d had. Finding things like inner peace and a sense of security, serenity, and belonging are important to them. Neptune here shows a deep fragility at the base of their personality and it may not always be obvious in more ‘tougher horoscopes,’ but it still exists. The placement of this planet often shows where one wants to feel a deeper emotional connection because maybe something was lost. Sadly, in the 4th, it may be the father who is physically absent through separation, divorce, or death. This position represents some form of elusiveness and inaccessibility. There can also be a deep sadness surrounding him, and he may be unobtainable physically and/or psychologically. Usually, there is an unconscious over-idealization of a fatherly figure, and on some level, a solid relationship with him has been sacrificed. The father may be Neptunian in other ways, and he could be artistic or might have even held dreams that went unfulfilled. Another possibility is that he might have been experienced as weak or disappointing in some way. In a lot of cases, there is a gentleness and ethereal quality to the father that is strongly felt by the individual.

According to The Vanilla Astrologer, “sometimes Neptune here points to a big family secret or a parent who was invalid or seriously handicapped. A lot of the time its alcoholism or even mental illness in one of the parents or in the family heritage. Sometimes it’s just a very murky situation.” This placement of Neptune shows sensitivity towards a parent, and there may be deep empathy for his suffering. A parent shown by Neptune might describe someone who is ill or addicted to alcohol/drugs, and so the nurturing element is hard to obtain if a parent is caught up in the negative hang-ups of Neptune’s world. Neptune has a powerful hold on the parent, and the victim/savior archetype also tends to fall close to home. As a child, they might have longed to save the parent from suffering. The father could have also faced early retirement from his career due to ill health. Whatever the case, there is a sea of disillusionment, disappointment, or deep discontentment surrounding the early years and they may even wade into later life in a great storm. Ultimately, Neptune here represents the search for a spiritual home and dream of finding the perfect resting place, away from the demand of reality. Often it can take some time before the dream materializes, and in other cases, it will always remain a fantasy.

With watery Neptune in the “home,” the individual needs to watch out for floods, springing leaks, and to make sure the foundations are stable. Those with Neptune in this house may even have to give up and sacrifice the home, in the worst-case scenario. Another thing to observe with Neptune’s slippery boundaries is around deception from someone close in the family. Anyone with this placement is prone to be gullible and invite (out of sympathy or pity) others to stay in their home, so be aware of those taking advantage of such kind hospitality. Those who have alcohol and drug problems or illnesses could mistake kindness and sympathy for weakness and take them for granted. Too many great sacrifices can be made on behalf of someone who is inhabiting their personal space.

On the subject of slipping boundaries, those with Neptune in the 4th house experience strange, mysterious, and even weird events happening at home. Like ghosts or psychic experiences and general eerie feelings. This placement could suggest that enjoyment is found in the exploration of spiritual subjects. Heaven is found when absorbed in artistic endeavors, music, and inspirational thoughts. All from the comfort of their sweet abode. So much so, that sometimes this placement, if other factors agree, may create a bit of a hermit at home. Neptune is often used as the main escape from reality. The real aim of this placement is to feel spiritually secure from the inside out and to let that feeling light them up. The home is an excellent guidepost or reflection of the beauty and tranquility (or even chaos) existing within, and once a real inner harmony is found, home life is magically transformed for the better.

According to Lyn Birkbeck:

For you, such sensitivity and yearning for some ideal focuses upon your home life and family background. It is most likely that you experience this as remembering things in the past as being idyllic. The streets or fields of your childhood have a rosy veil cast across them. Indeed, such childhood dreams are true, even if only because of the way you perceived life in those innocent times. Actually, this is the whole sentiment underlying Neptune here: that life is as sweet and as secure as you make it. The negative value here is of course one of glossing over the less pleasant and harsh experiences of early life. This has the effect of making you feel rather rootless, because through denying past pain you are still denying a part of yourself. So, you have to go into that pain and re-emerge, cleansed with a far clearer sense of ‘Paradise Lost’; this in turn enables you to go about regaining your ‘Paradise’, thereby imbuing your home with a hauntingly familiar quality. This is very important to you, and creates a haven for others too. It also has something to do with your psychic sensitivity to the Earth and Nature’s forces. Without doing this ‘regaining’, as with the weeds at the bottom of the pond, you can be trapped in the past, or in the self-contained nature of your family and particularly the relationship with your father, who may have been a vague, weak or unavailable figure. Positively, though, he could be a great example of selflessness and compassion. With regard to finding a home itself, this is often in the lap of the gods in that some power outside yourself grants or takes away special abodes. Living by the sea is especially desirable and beneficial to you.