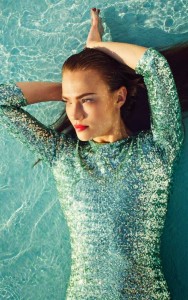 Those with the Sun conjunct Neptune have a hazy boundary line to the ego, and the personality can be extraordinarily sensitive, compassionate, and gentle. The person feels selfless and devoted and is capable of surrendering to life. The individual is also adept at making sacrifices for others, and giving up an independent identity. Sun conjunct Neptune’s vision is altruistic and inspired with a high sensitivity to the emotions of others. Stephen Arroyo wrote about this combination and  hailed it as exceptionally common in those whose lives are guided by a larger, more encompassing vision than normal.

The intuitive and psychic ability is often well developed, and the individual is open to many different realities. Some astrologers even describe this placement as the mystic in the truest sense. C.E.O Carter believes this is the most common aspect in the charts of astrologers, especially those involved in the art of predictive astrology. The author also says that whatever subject interests the native, there is usually a lifelong devotion.

The Sun-Neptune conjunction can make the individual over-sensitive and vulnerable, and the nebulous influence of Neptune tends to confuse the personality. Sun-Neptune to a very large extent is also prone to drift off into a world of drink and drugs in order to avoid facing some of the harsher aspects of life. Confronting reality is not always easy for those who are prominently Neptune. It seems effortless for the individual to wander off into their dreams and become lost in their imagination and have a tendency to live in their own reality.

The individual’s self-image is attached to idealistic images and unrealistic expectations, which only leads to disillusionment and disappointment. One of the hardest lessons for Sun-Neptune is facing the realities of life, and the real self may be lost. The task often involves trying to keep hold of their self-confidence even when it feels like it is slipping away.

The Sun conjunct Neptune person may enjoy losing themselves in art, music, drama, film and photography and are heavily influenced by fantasy, and this is a healthy outlet for this energy as they are tremendously creative. Another avenue for the Neptune type is working in medicine, social work, or in the community, and this helps the individual to serve the collective (Neptune) in some capacity. This can be highly fulfilling because they have a strong desire to serve and please. The individual is easily inspired, there is a great affinity with the ocean, channelling itself through the conscious side of the personality. If their gifts are successfully channelled it can benefit us all, and reveal a luminous experience to all of life.

The image of the father can be strongly spiritual, and there is something of a nebulous and confused image around him. The father and other male images are strongly idealized, and it may be difficult to get hold of the real father. Sometimes this male role figure is highly religious or spiritual, gentle and sensitive. Sun-Neptune’s own self-image is hard-to-define, and their feelings and yearnings create confusion and self-deception. The father may have been thirsting for more in life, but sometimes anyone who goes after their dreams in life can meet with sadness if they never materialize and live an unfulfilled life. The personality is sometimes evasive, and the individual slides away from real confrontation, and this makes is difficult to achieve their dreams and follow the solar path.

The individual may be susceptible to illnesses, and they need to take care around drugs and medication as they are extremely sensitive. A couple of astrologers have linked this combination with suicide and this follows closely with Sun-Pluto aspects in the horoscope. It’s not difficult to work out why, as both planets have a connection to death and other realms. Many Sun-Neptune types have a strong avoidance of life and they long to escape it all. Neptune has to be handled carefully, but it can open up the person to strong creativity, sensitivity, and connectivity with others. Neptune can transform the personality, but also elude the individual, and the most difficult part of the aspect is not having a clear, objective or accurate self-image.