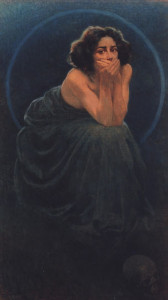 I compiled all of these 50 reasons why you’re a Scorpio from every Scorpion article on this website.

1. As a water sign, the Scorpio personality reflects deeply on life’s mysteriousness, its complexities, submerging the self into everything that exists below the surface.

2. When a Scorpio is mad the emotional power is like a stormy vortex, with deep passion swirling underneath a cold exterior.

3. A Scorpion is extraordinarily psychic and will pierce the veils of subjects feeding an incessant need to plumb the depths of all experiences. Many Scorpios are interested in the esoteric, occult and spiritual experiences, offering deep insight in the hidden workings of reality.

4. Scorpio has an especially acute emotional grasp on our experiences. The Scorpion personality has a way of going by their instinct straight to the mark.

5. Scorpios will decry those who are trivial and prefer style over substance

6. Scorpio will have a passion for justice, particularly when a specific person has wronged them. A highly deserved sting is usually in order.

7. Scorpio will dig below the surface and decipher life, illuminating its meaning, reading into events, that are not easy to understand.

8. Scorpio is amazingly adept at sussing things out and as this zodiacal sign, rules over all things hidden, they penetrate deeper by realizing that no one ever does anything for no reason, whether or not they’re aware of the reason.

9. Scorpio’s life is often witnessed as dramatic and there is always a basic conflict or tension between two opposing sides of their nature. One is to surrender to the animalistic instincts which are to fall into the marsh of human weakness and brutality; there are powerful lessons in dealing with desire. The other struggle is to rise above tragedy and display courage, sensitivity, and their spiritual nature.

10. Scorpio is symbolic of the abundance of contradictions from feeling weak and powerful to passionate and cold; there is nothing done by half-measures and the complexity of the personality finds it incredibly difficult to skim the surface of life and must uncover what lies beneath.

11. Scorpio possesses an actual magic or a powerful and magnetic personality, but their most important gifts live within the indestructibility of the soul and a powerful need to survive great heartache and misfortune.

12. Many a Scorpio has been drawn like moths to a flame to painful encounters in the romance department.

13. The Journey for the Sun in Scorpio in this lifetime will involve some heavy and intense motifs, as well as stirring all the unconscious, psychic, repressed material underneath.

14. Scorpio’s emotions (fixed, water sign) have been described as an iceberg, and just like the glacier we only see parts of an iceberg on the surface, but there is a whole lot more going on underneath.

15. The icy strength of the individual masks the depth of emotions lurking below. This is why confronting a Scorpio needs to be done carefully as the enormity of their emotions often remains invisible to others.

16. The Scorpion nature is secretive and teeming with intensity, and there is a veiled mystery about the type which contains many deep mysteries kept hidden.

17. The Scorpion keeps many of their true feelings to themselves. In fact, they become impossible to read. Everything runs deeper and is powerfully felt.

18. If we manage to tear off those Scorpio layers and look inside we always find something profound, a caldron of emotions stirring within.

19. Scorpio won’t give out flattery unless they absolutely mean it. For the most part, they keep to themselves. In love, they prefer a dark palette something with depth, as they are drawn towards dangerous liaisons and can be completely overtaken by them.

20. They are a powerful source of sexual, mystical and transformational energy. As lovers, Scorpio will love to penetrate deep and to psychoanalyze a lover, and just like a psychologist reveal nothing of their own inner workings.

21. They plumb the nadirs; delve into the unconscious, and are aware of the dark undercurrents running through mankind.

22. Barbault described the sign as “the cemetery of the zodiac.” This portrayal, although morbid, is accurate as Scorpio rules any and all areas of life and death.

23. The Scorpion is the only animal that can kill itself with its tail.

24. Halloween is celebrated during the month of Scorpio, and the “doors between worlds” open the connection between humans and the spirits of the dead. The sign is associated with the descent into the underworld, signifying the journey to the very depths of our psychological selves and forcing us to confront our inner monsters.

25. Scorpio is the art of transformation and this is usually something associated with change and metamorphosis – changing negative beliefs into more positive ones.

26. Scorpio also suffers from jealousy, extreme possessiveness, obsessions, rage, and hatred. The sign is colored by passion and intensity, but this also means other extreme emotions, including deep love, loyalty, and commitment.

27. Scorpio longs for powerful experiences and there is an emotional resonance we all feel with the Scorpion and their ability to turn tragedy into triumph, something within explodes and detonates into action – the soul-penetrating kind.

28. You will sometimes find a Scorpion somewhere in the shadows, in a dark underworld, penetrating into a black mysteriousness, and emotional intensity, carrying the whole cycle of life-death-rebirth in their soul.

29. Always in need of a good mystery to solve, they love to explore human nature; subjects such as psychology and the occult completely fascinate from head to toe. Scorpio lives and breathes for secret knowledge, esoteric study, and anything cryptic.

30. Scorpio possesses an amazing psychoanalytic ability, with razor-sharp senses and does well in all healing capacities. When their power is constructively directed, the individual can be a tremendous force in the world.

31. A Scorpio possesses deep instincts on a psychic level. They glimpse behind reality to the invisible world.

32. Scorpio’s ability to burrow deep means that they excel in research, detection, and the occult.

33. The hero inside of Scorpio is on a great journey, discovering their own power, and learning to rise up to their own greatness.

34. The Symbology of Scorpio is complex and they are known to have extreme emotions and like the other water signs, these deep feelings are often hard to verbalize.

35. There can be a tendency to be self-protective, quiet, brood and mood and it is, sometimes, difficult to pry the individual open.

36. They have a naturally mistrustful nature and have learned from an early age how to spot people who are not being sincere.

37. Feelings run deep, and rarely do they change; one of the most important things to this individual is maintaining relationships.

38. Scorpio needs relationships to be deep, both sexually and spiritually.

39. Scorpio is unforgiving. They often have too much pride to apologize, but will let it go eventually, once they have got even. Scorpio shows no mercy towards those who have wronged them.

40. The individual may repress their emotions, and often find themselves sitting on explosive feelings. Things that are held for a long time tend to generate more power and result in pent-up emotions that are dangerous, resulting in behavior that is sexually inappropriate, self-destructive or violent.

41. Scorpio people are like black magicians and very hypnotic.

42. One of the Scorpio’s most characterized traits is jealousy. Perhaps their chief foibles in relationships are jealousy, pride, and a dominating disposition, broodiness or sarcasm.

44. Scorpio is like the frozen lake, and it’s difficult to see beneath the surface unless you have an ice pick! The physicality of death reveals some of Scorpio’s stillness and coldness, but don’t be fooled into believing they don’t care. As a water sign, there is always intense feeling underneath. Full of dark mystery, there is always more beneath the surface than meets the eye.

45. Scorpio’s identity is based on power and social influence, but they also have the ability to become quite unnoticeable, yet still emanate an intense atmosphere.

46. Scorpio is the ruler of plot twists, fateful events, secrets and often something which has been kept hidden comes to the surface, resulting in a massive explosion of emotion.

47. Profound emotions usually hide their vulnerability; the person will sting and wound anyone who seems to threaten its protective layers, for these people are certainly no pushovers, lashing out when others invade their space.

48. Scorpio operates between passionate engagement with the object of their desire to frozen withdrawal, traversing between the hot and cool nature of the sign.

49. Scorpio’s are hard to get to know and they need to look deep within to come to terms with their own mysterious nature.

50. Scorpio is life and death and before the phoenix rises from the ashes, they often live in a locked state of darkness, until that time they take flight and show us the true power that nature possesses.