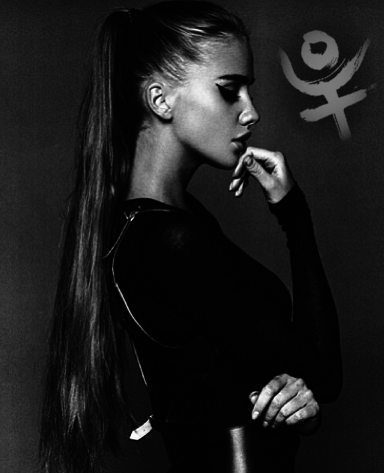 According to the astrologer Liz Greene, the pretense that Sun-Pluto women will adopt to cover up another, more powerful personality is rather fascinating. Many individuals with dominant Pluto aspects pit themselves against survival tests, and will do this in relationships. Women with inharmonious Sun-Pluto aspects (Conjunction, Square, or opposition) often end up in a relationship with a “powerful” man who may wield an enormous amount of control over the relationship. In a case example, a friend of mine possessed a Sun-Pluto aspect and she was in a violent relationship, which was abusive but also passionate. Yet, there were times she seemed to live (Sun) for the drama (Pluto) and could never let go, even when he caused an inordinate amount of pain. Yet she wasn’t a weak person? Not at all. It seemed to be the case that my friend was projecting this dominant Pluto shadow onto her male partner (Sun), and often when we unload Pluto onto another individual it can be seen through possessiveness, manipulative behavior, control, cruelty, savageness, bitchiness, or devouring behavior.

Understanding our own inner nature is a really important aspect in the study of astrology, and most likely the most vital part of learning it. In the case of Pluto in our life, when we feel this kind of vindictiveness from another it is usually highlighting a wound that we often did not even know we had.  Astrologically the Sun illuminates whatever it touches and when it makes contact with Pluto it brings to light the hidden, repressed, and blocked energy in the personality. So if a man comes into our lives representing this figure (Pluto) natally or through a Sun-Pluto transit, say, he is really the illuminator of something potentially life transforming. In The Astrology of Fate, Liz Greene indicated that the “volcano is often located wherever Pluto is found in the horoscope.“ Wherever Pluto is located we may have a surge of explosive emotions erupt in our lives.

Pluto was named after the God of eternal darkness, and describes our loss of innocence in exchange for experience and maturity, something we may not have possessed before. Through pain, loss and wounding there is new self-awareness and lots of emotional growth. All of this happens in accord with Pluto’s function, which is to eliminate old thoughts and patterns of behavior preventing further development.

Sun square Pluto is a peculiar aspect in a woman’s chart because more often than not it is unconscious. The will to power, and the capacity to wield power through subtle emotional means, is not something which many women of that generation would admit; and in even younger generations it is not an easy aspect for a woman to live, because it is considered “unfeminine” by the collective. A good example of this is Margaret Thatcher, who has the Sun square Pluto. More often, the woman with Sun-Pluto will pretend that she is weak and helpless, and will apparently give the power away to another; but then she becomes the victim, and can manipulate through guilt. I have met many women with this square who try very hard to portray a fragile, fluttery persona, while underneath there is a stainless steel spine. They are about as fragile as the Rock of Gibraltar. The Development of Personality: Seminars in Psychological Astrology

Pluto emphasized on the chart (either by aspects to personal planets or situated on an angle) is common in the charts of those who emotionally blackmail others. The psychology behind this is that Pluto is a demanding planet anyway, and it makes us demanding on others by nature of it being prominent. If the individual the Plutonian type is trying to manipulate resists they begin to exert pressure and use terms like: Don’t you love me? Can’t you see I only want what’s best for us’? In some cases, this can be authentic, but in other situations, if the person still refuses to do what they ask, the Plutonian makes threats in order to force things, and so there is always a power struggle. According to psychology, manipulators are usually frustrated people that feel the need to take drastic action in order to get what they want. Now, the planet Pluto is pretty famous for its intense frustration in life, obsession and denial of something or someone passionately desired. Furthermore, the Pluto type only goes after things in this manner if they are vital in some way, but they are also protecting themselves from possible loss. This is something we all fear in relation to Pluto, it could even lie at the core root of most of our anxiety around the issues of this planet.

In the end, blackmailing is really a cover for neediness or deep insecurity in the person abusing, threatening, or forcing others to behave in the way they want them to. The roles of being in control and controlled can be interchangeable in the life of the Plutonian. We often find that some Pluto types are overt in making their demands and others are far more subtle. It’s the people closest to us that can have the most power, and they can threaten to cut us off financially, promise divorce, or give out verbal or physical abuse (Pluto and 8th house stuff). Usually, with difficult Pluto aspects in the chart, manipulative behavior is often the result of being manipulated ourselves in the past. The takeaway is that we are often actually very powerful in our Pluto areas, but we just need to tap into our own resources, and usually, that does not happen until we’re forced to do so by means of survival.