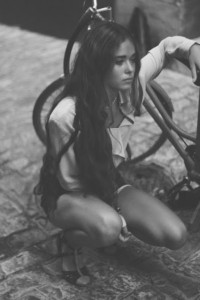 An individual with Mercury square Saturn will often possess a decidedly methodical mind and probably the kind which can produce a good organizer or successful businessperson. However, such a person can get stuck on the mental plane leading to frustration and it can indicate some part of learning, communicating or a simple expression of the self through words is painfully awkward. Sometimes it is rudely referred to as the individual who suffering from some kind of “mental constipation.” There also seems to be a strong association with speech difficulties with this aspect such as stammering or stuttering and also with defects of hearing.

Astrology’s school of thought will say these two planets are natural “friends.” The meeting of the mental plane and physical matter gives an overall structure and purpose showing a practical application of the mind.  There is a willingness to take responsibility and to work for some kind of academic achievement. However, as reality bites, it can also show a failing in learning how to communicate sufficiently and a deep frustration in regards to developing their intellectual abilities to the fullest. The person is trying to constantly improve their mental status and this can lead to a subjection of self-discipline and rigorous lessons, along with internalizing self-punishments for failure.

At worst this contact has been called closed-minded with a fearful mind, always expecting the worst. Overall, the mentality is highly focused on reality and there’s a stable, sound quality to judgement.Often there is a sardonic humour, grimly mocking or cynical and it is based on a deep intellectual observation of the real world. Frequently through this cynicism and pessimistic view also shines a great wisdom. It can reveal good timing with words and present an individual who is not easily fooled, serious when necessary and level headed.

At best, we often see an individual with Mercury square Saturn as an authority in education, lecturing and learning. Still, the individual has felt challenged in learning how to communicate to others clearly. A sober attitude with a painstakingly patient concentration helps them to achieve their intellectual goals over time. They can be too exacting, feel dissatisfied, frustrated and angry at work. Also, feeling like a ‘wet blanket’ but there is often genuine disappointment with schooling or the feeling of not having had the same educational opportunities as others.

“Where we have been excessively preoccupied with academic success as a means of gaining status, despite intelligence we may be held back by an extreme lack of confidence, which leads to losing interest in our schooling or giving up sooner than we might have done. Or occasionally we may be the seemingly opposite type – the ‘bookworm’ or ‘swot’, driving ourselves unstintingly in our studies, experiencing a compulsive need to improve our qualifications but finding it impossible to relax and thus risking a nervous breakdown. The whole area of academic achievement may be a cause for concern, leading to worry, stress-related physical symptoms. Over concern with social approval may also inhibit  our verbal expression, giving rise to self-consciousness or fear of saying the wrong thing. Our upbringing is excessively disciplined both at home and at school. In some cases, we may be expected to accomplish more than we are intellectually fitted for, subjected to academic pressure, and severely criticized or ridiculed in the event of failure. In other cases it is our speech which may be subjected to constant criticism. ” The Astrology of Karma by Pauline Stone

Saturn tends to inhibit whatever planet it contacts, we often feel some area of life is shackled and its development has somehow come to a halt. The mind (Mercury) is often gripped in contractive fear (Saturn), feeling like a dull penny or lacking intelligence. Speech may be inhibited and general thinking is extremely cautious, censorious and carefully controlled.

“Often the Mercury-Saturn person will do poorly in school not because he is stupid, or unoriginal, but because he often believes that he is stupid and will turn in work so slowly, in such fear of making an error, that his intelligence is underestimated around him. Mercury-Saturn may equally often become pedantic and incline toward overcompensation by placing great emphasis on intellectual accomplishment, but it is usually labored accomplishment without the natural ease and grace of the Mercurial temperament. The individual may in childhood have difficulty in articulating, because of shyness and fear, which may in turn be interpreted as a lack of interest. He may express the characteristic Saturnian taciturnity, masking a sensitive and deeply thoughtful temperament with habitual silence. There is a likehood typical of Saturnian aspects, of a “vicious cycle”, perpetuating itself since his fear aggravates his frustration and incompetence which in turn aggravates his fear.” Saturn: A New Look at an Old Devil by Liz Greene

Mercury square Saturn can reflect parental criticism, unfavorable judgments and it has resulted in a constant negative inner voice. A parent could be anxiety filled or depressed and the child picks up this negativity. The mind of the individual with such a contact is often paralysed so they feel unable to make a move intellectually. Notably, this aspect can also be indicative of a compulsive need to control the learning environment. Truth be told, negative emotions are more memorable than positive ones and so early learning challenges or never feeling good enough for parents or teachers approval can be emotions forever etched in memory. The individual’s greatest challenge is coming to terms with this inner critic and learning to master this looming shadow over communication, coping with dark and negative thoughts. For self-mastery, this could mean completing a long-term project, writing a book, something involving organization and structure. The goals are efficiency and the accomplishment of a great work.

Saturn in astrology is often where we feel unskillful, clumsy and inept. It is also where we like to feel safe. Sometimes within those confines of feeling secure, we also stop growing. For instead of feeling safe and secure behind Saturnian armed walls we find ourselves trapped in the prison we have built with our own fears. Mercury square Saturn can feel stiff and wooden at times, afraid to say the wrong thing, fearful of making a mistake, terrified of messing it all up. Once the individual overcomes these fears it can unlock all of this frustrated energy and then the intellectual energy it is applied to achieving something masterful on the mental plane.