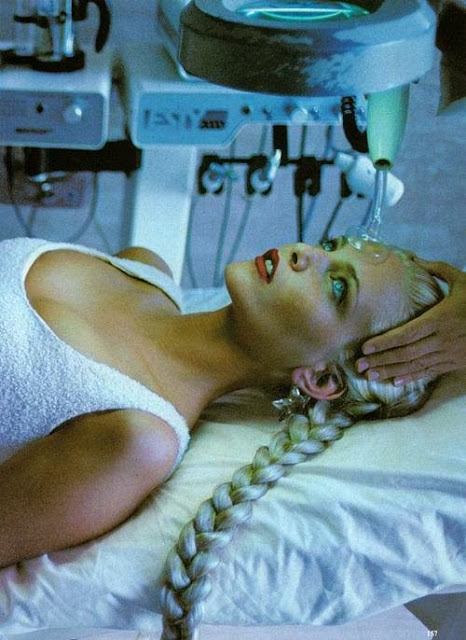 Genetic engineers Clive Nicoli and Elsa Kast achieve fame by successfully splicing together the DNA of different animals to create incredible new hybrid animals. Now they want to use human DNA in a hybrid that could revolutionize science and medicine. But the pharmaceutical company that funds their research, N.E.R.D. (Nucleic Exchange Research Development), forbids it, instead mandating that their department be reorganized to focus on finding and extracting certain proteins from the creatures they have already created. Not wishing to spend all their time engaged in what they consider mundane research for the next 5-10 years, Clive and Elsa secretly conduct their own experiments, blending human DNA with that of other animals.

Though they disagree about actually bringing the hybrid to term, Elsa pushes the issue and she persuades Clive to go along with it, in continued secrecy. They name their creature Dren (nerd backward), who exceeds their wildest dreams; she begins to grow and learn at an accelerated rate. As their lab becomes exceedingly crowded, and the risk of Dren being discovered increases, they move Dren to Elsa’s late mother’s farm.

Their work at the company suffers as their attention is focused on Dren. One of the original hybrid animals that they had created, which was originally female had changed sex unbeknownst to Clive and Elsa since they were distracted. This led to a disastrous presentation during a company shareholders’ meeting, when the two original hybrids, previously one male and one female very much in love with each other, became both male, killed each other in front of shareholders and potential investors. Following this meeting, N.E.R.D., found itself in danger of going out of business unless they could find a profitable discovery.

The symbol for the zodiac sign Aquarius is a jug with water in it, and the water pouring out of the jug represents the flow of inspired knowledge. Uranus, the planet that rules Aquarius in modern times, is associated with the fields of architecture, astrology, astronomy, mathematics, geometry, and letters. The power of Uranus brings about technological and scientific advancements that are to society’s benefit. When we strive for such rapid development, however, it can lead us to occasionally cross ethical boundaries and place ourselves in uncomfortable moral predicaments. When carried to an extreme, Aquarians can be unrealistic due to their tendency to become excessively detached from reality while pursuing their vision.

Aquarians are devoted and loyal to their causes, and they have an unyielding determination to see them through. They are always at the forefront of innovation and can frequently be found sketching new models. The Aquarius sign possesses an enormous potential for creativity, and its representatives are the thinkers and visionaries of society’s future.

Aquarius is born ahead of its time. Inventive and innovative, they bring the future into the present. They are interested in ecological conservation, new energy sources, vibrational medicine, and social change. Their mission is to help humanity to evolve…This can lead to misunderstanding as other people are seldom ready for their revolutionary ideas…Twenty years down the line they realize they were right after all. By that time, however, they will have moved onto the next challenge. Past Life Astrology: Use Your Birthchart to Understand Your Karma

The picture of Pandora’s Box that is depicted on the front of the star (Aquarius) card in tarot deck and serves as a potent reminder of the potentially disastrous outcomes that could occur if something were to go wrong and man allowed his curiosity to get the better of him. Fire was originally a gift from the gods to humanity, but Prometheus is credited with stealing it. This infuriated Zeus, and as a consequence, he ordered Hephaestus to create Pandora and her box. He then instructed Pandora not to open the box, despite the fact that he knew she would. When the box was opened, it let out all of the world’s ills and sufferings, along with a glimmer of hope.

Aquarius Fears/Dislikes: Being accused of being self-centered, being scared of their feelings, being mushy and overly sentimental, having their personal relationships questioned, acting irrationally, being angry, being jealous, and acting emotionally.

The shadow side of Aquarius can be described as an undervaluation of ordinary human feelings and emotions. There is a kind of ideological rigidity or totalitarianism to Aquarius which can be brutal to the extent that it rides roughshod over ordinary human concerns with their inherent sense of superiority. Aquarians can be critical of ordinary mortals, who can be too slow or flawed or stupid tp appreciate their brilliance, truth and clarity.