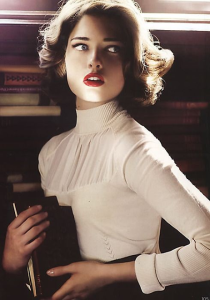 Virgo’s symbol is the virgin and the sign is often considered a shy personality that is bookish, virginial and loves nothing more than to fix things around the environment. Though Virgos are seldom chaste, they often keep a powerful sense of self-containment and will usually need a large amount of privacy. This temperament is quiet in nature and drawn to seclusion.

The traditional symbol of the sign Virgo is sometimes shown as a woman carrying a sheaf of corn in her arms, representing the harvesting of wheat at the time of year of the Virgo (late summer). This seems particularly appropriate in the northern hemisphere where, at the period when the Sun is passing through this sign (approximately August 23rd to September 23rd), the harvest is being gathered.

The glyph for Virgo depicts a tail that wraps inwards, closing itself in deep introspection. The coiled ‘M’ is said to represent the sexual parts of the body. This, in comparison to the sign for Scorpio, which is related, except that the tail points outward and upward in an arrow. In Virgo, the element of EARTH manifests in its mutable or adaptable phase, and will naturally navigate the earthly world with ease. For the Virgoan, knowledge is gained through investigation of practical matters, which helps Virgo be of service. The conventional image of Virgo is nitpicky, fastidious, and something of a “neat freak” in our modern-day. Although the sign of Virgo has moved with the times, there are some remaining attributes that continue. Virgo people are by and large decent, hard-working individuals who have a love of knowledge and deep insight into the workings of nature.

Because of the connection to the planet Mercury, we often find some Virgos drawn to anything that uses the mind to shape and mould matter, as in care over detail, and showing proficiency in absolute accuracy. The Virgin, reveals itself in the lives of Virgos through a fondness of all that is “natural” and a certain virtue, goodness, and integrity within the soul, that keeps Virgos self-sufficient and restrained, with a sense of perfection. Virgos, being mentally active, are constantly seeking knowledge that will bring all matter under the control of the psyche. They are drawn to all types of scientific study and often become clever, artful and intelligent to the world. Being highly sensitive to their environment, they tend to fluster easily. They are generally reserved when confronted with anything or anyone new. However, once they feel comfortable, they are extremely talkative and possess many interesting ideas on all kinds of problems to solve.

Many Virgo Suns are not too comfortable in the public eye, while a good servant, they are liable to become over-anxious, being concerned with correctness. These characters are okay with their humble role, as long as they feel useful and appreciated. Solar Virgos have a strong sense of obligation, even when they’ve convinced themselves to be less than perfect and not place sections of life under the microscope, they care.  When Virgos are not involved in some kind of labor, analysis or criticism there is generally an indefinite impression of dissatisfaction. Even when their lives are filled up with work, they are antsy and somewhat nervous creatures, always weighing, analysing, and dissecting matter.

The fear of under-performing is often powerful, and Virgos want to do things to the best of their ability. Some are demanding and exhaustive, and those Virgos who have assured themselves to do a less-than-perfect job will generally feel there is still a magical key to be found to unlock the secrets of the natural environment.  Virgo, as an earthy sign, has a noted relation to the physical being. Solar Virgos are generally very aware of their body, and state of health. In some cases, this shows up as some form of hypochondria, but, for the most part, Virgo is simply quite concerned with general wellness and nourishment. Virgo is attracted to all that is natural and pure, and can often be found in various roles, such as nursing, chiropractics, nutrition, plus other key positions of healing.

Virgo is a profoundly curious sign, and there is a strong desire to remain saintly on some level. Those Virgos that find a genuine interest or “calling” easily become authorities. With their attention to details and enormous observation powers; it gives them the ability to learn everything there is on any subject. These people love to do research, in addition to synthetic or detail work. Through the humblest of service, they’ll gladly pick apart much of anything, but often have trouble grasping the larger picture.

Virgo: The Critic
Songs of the Zodiac: Virgo
Virgo: The Perfect Ordering, Categorizing, Rationalizing - Haunted-Minded-Psychic!
Virgo: Practical Magic
Earth Signs - Boring and Predictable?
Is Virgo Really the Most Transformative Sign?
The Astrology of Cats and One Dog
Virgo: The Right Job