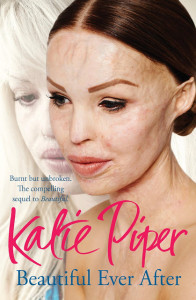 Katie Piper is my favourite inspiring person on the planet, and she is someone who I consider to be absolutely remarkable. I see her as a beacon of hope for many individuals who are going through really difficult situations and are beginning to believe that there is no way out of it. Sometimes we require living confirmation that life continues for us, even in the wake of the most heinous of atrocities that might occur. Perhaps when we believe that life has no meaning, she represents the hope that we may still discover beauty and even a happily-ever-after if we persevere. Witnessing her transformation on the inside and outside has been incredible, and she has led us through her most excruciatingly painful times on the path to receiving the ‘Courage Award’ at the Pride of Britain Awards and the ‘Women to Watch’ award from Red Magazine.

Since the attack occurred in 2008, many people are familiar with her story, and this is what we call in astrology a 7-year milestone which she has now reached, tied to Saturn’s cycle. In fact, her Saturn Return occurred at the same time as Katie’s pregnancy and the purchase of her magnificent new home. Here’s a short rundown of what has happened so far:

In March 2008 sulphuric acid was thrown in her face. The attack, which blinded Piper in one eye, was arranged by Piper’s ex-boyfriend Danny Lynch and carried out by an accomplice Stefan Sylvestre; both men were arrested and are serving life sentences in prison for their crimes. The attack took place in North London and Piper was treated in Chelsea and Westminster Hospital, where the surgeons removed all the skin from her face before rebuilding it with a skin substitute and then a skin graft. The procedure was the first of its kind to be completed in a single operation.

“In 2009, Piper chose to give up her anonymity in order to increase awareness about burn victims. The Channel 4 documentary Katie: My Beautiful Face was first aired on 29 October 2009 as part of the Cutting Edge series; it has subsequently been repeated on several occasions, made available for online on-demand access and sold internationally. More recently, Piper has appeared in follow-up series for Channel 4, released a best-selling autobiography, and had a regular column in weekly magazines. She also presents the Channel 4 television series Bodyshockers about members of the public about to undergo body-altering procedures and those who regret procedures they have had. However, she primarily works for her charitable organization the Katie Piper Foundation. In October 2013, she announced that she was pregnant. Piper gave birth to her first child, Belle Elizabeth, in March 2014. In December 2014, she announced her engagement to her partner Richard James Sutton.”

In the book Beautiful Ever After tells the story of the model’s effort to reconstruct what was left of her life and self-image after the end of her modelling career. It has its devastating moments, especially when re-entering the dating environment and looking for a companion for the first time. After meeting at a dark nightclub and asking her out on a date, one of the men saw the degree of her burns when they met up in daylight. He went inside a restaurant for a dinner, then exited for some reason, maybe to speak with friends. After some time had passed, Katie understood what had occurred and rushed out of the building, tears streaming down her face. Piper poured herself into her job and the development of the Foundation. Now, at this point in Katie’s life, everything has worked out for the best, and she has found happiness with a new boyfriend and a new baby.

In the astrology of the awful events, transiting Saturn was conjunct Venus and Mars in Virgo, which we may characterise as a ‘destructive impact’ on appearance and attractiveness since the planet Venus is associated with self-worth and self-validation. In classical astrology, the planets Mars and Saturn are considered to be evil. Burns are also associated with a Mars-Saturn aspect, as Carter pointed out in The Astrological Aspects: A Guide to the Signs of the Zodiac.

“Exteriorly Mars-Saturn tends to a life of hardship and suffering, as well as to the undergoing of physical violence…There is also a liability to burns and scaldings”

In some ways, it resembles a passage where Venus in Virgo is the naive girl surrounded by a masculine dominance mix of brutality, cruelty, and an unexpected attack. The surprise factor of the assault is highlighted by the fact that Mars and Venus are in square to Uranus natally. Mars is the planet of fury, aggression, violence, and everything hot and flammable, such as fires and burns. Strangely enough, transiting Pluto trines Venus and Mars in the backdrop of these difficult transits, and we occasionally observe easy Venus-Mars-Pluto in extremely heated and sexual partnerships. She may have been lured into the stormy waters of this connection, but this is only a wild guess on my part. Piper was raped and stabbed by this monster, thus it’s possible that these trines unintentionally encouraged the attraction to those who are mentally darker, causing them to feel mysteriously pulled, possessed, and dominated, against their better judgement.

Every time I watch at Katie, her warm, wonderful personality, brilliance, and sense of humour all come through, despite the fact that she has had to endure so much. She is a living testament to the strength of the human spirit. As a bonus, while reading Beautiful Ever After, I noticed that she was very much a Virgo as she referred to herself as “grounded Katie” and, more importantly, when her mother was diagnosed with cancer, she immediately turned to the internet, sending recipes for meals that contained healthy agents to aid in the fight against the illness. Exactly what the loving character of Venus in Virgo and the intense battling energy of Mars in Virgo would likely do!

“I was on the phone to mum having our daily chat. I’d texted her a funny picture of my non-existent bump that morning and we were planning our next weekend together. She had recently told she had been feeling unwell for a few weeks and was plagued with stomach problems that wouldn’t go away, so her GP had arranged for some tests. I had been telling her I thought she had irritable bowel syndrome, or something like it, and we were waiting to see if I was proved right. ‘I had my scan today,’ she told me. ‘Is it IBS? What do you have to cut out? Gluten?’ ‘No, Kate, it’s not IBS.’ She paused and I sensed straight away she had something big to tell me. ‘They suspect it might be Cancer.’ The world stopped, I didn’t hear anything else she said after that. All I could think was that my best friend, my most trusted confidante in the entire world, the person who was with me always. She’d given me hope, coped with my despair, raised me, made me, saved me. I couldn’t believe she could be ill. The thoughts were coming too thick and fast. I cut them all off, tears starting to roll down my cheeks. ‘What?? Please no. Mum, please. I can’t believe we are having this conversation.’ I could barely breathe. ‘It’s not fair, you don’t deserve this. You can’t be ill, you’re Mum. I’m the one who is meant to be ill. You’re the one that’s supposed to be well. Please, Mum. Not you. I need you.’ I was choking on the words and she tried her best to calm me down…. My mind raced: there had to be something I could do to make things better, some answer that would fix everything. After all, I’d been fixed when I was very, very broken, so I knew it was possible; there must be something practical that would help mend things and get everything back on track. …I went into Practical Katie mode and ran upstairs to switch on the laptop. I starting googling everything I could on colon tumours and cancer, I’d once been to a juice retreat in Portugal where they talked a lot about the belief that juicing can help fight disease. I found lots of potential cancer-beating recipes online using wheatgrass, spirulina, cabbage, broccoli, spinach – all the green vegetables. I googled tonnes of superfoods, and ordered the best juicer I could find online to be delivered to their house. Next stop: Ocado. I ordered them enough fruit and veg to stock a market stall so mum would be all set to make the juices herself. I ordered a book which promised to help you drink your way to health then sent her an email with a whole diet plan for juices that are reported to help shrink tumours and help the bowel, and instructions on what to avoid. Two hours later I switched off the computer, exhausted and tense but sure I’d fixed everything. I’d been my usual practical self. Now everything can return to normal. Couldn’t it?

We know that the Virgo energy in the chart is drawn to charitable work, to assisting others, and to serving others. They must be helpful in order to operate on a daily basis, to feel useful, and not to feel like a useless utensil in the kitchen when dealing with turmoil and chaos management. They must be able to function in a healthy manner in terms of body, mind, and soul.

Katie said that she had been image obsessive prior to the incident, always wanting to appear beautiful and lovely, but that she now cared about more important things in her life. She maintains her high level of style and presents a stunning picture. There are several themes that come to light in Katie’s life after reading through The Knot of Time for the Sun sign of Libra, themes that she incorporates as a Libran who is redefining what it is to be really beautiful.

However, the following passage from the book below struck me as very significant for some reason:

I do feel many strengths have been drawn out of Katie since the attack, new found power, and there is less need for social approval.