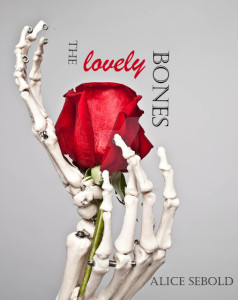 I finished reading The Lovely Bones the other day, and it’s a deeply traumatic story about a teenage girl who, after being raped and murdered watches life and her family from heaven. The story portrays dismembered and murdered children  are portrayed as living in heaven, sucking lollipops and playing in fields of perpetual bloom. The novel became a bestseller, it was beautifully written and includes wonderful metaphors. The mother, in this tale, I have mixed feelings for. I utterly fell for her mysterious ‘ocean eyes’ and this whole other life yearning inside, but after what she did, I’m feeling the same sentiment of the young son, and would have said “fuck you.”

I searched for the author’s, Alice Sebold, other books and found out she had a dark, past history; it explained the tragic nature of the whole thing.

Sebold graduated from Great Valley High School in Malvern, Pennsylvania, in 1980. In the early hours of May 8, 1981, while a freshman at Syracuse University, she was raped while walking home through a park off campus. Her attacker dragged her into a tunnel and brutally sodomized her, urinated on her, and severely beat her. She reported the crime to the police, who took her statement and investigated, but could not identify any suspects. Sebold returned home to Pennsylvania for several months before returning to Syracuse to finish her bachelor’s degree and study writing. On October 5, 1981, while walking down a street near the Syracuse campus, she recognized her rapist. She notified police and testified against the rapist in court; he was convicted of rape and sodomy, and sentenced to eight to 25 years. Her attacker is out of prison now, but Sebold says she has not kept track of his whereabouts.

On the day of the attack transiting Pluto was conjunct natal Mars indicating a forceful, brutal, sexual and violent energy at play.

Mars/Pluto is definitely a violent aspect. It is one of the rape aspects, either Mars conjunct, square or opposite Pluto. The Art of Predictive Astrology

Mars and Pluto together are usually thought of as the significators of rape in the sexual sense. Aspects in Astrology

Mars/Pluto people have an exaggerated reputation for being involved in violent manifestations, such as rape and murder. Celestial Psychology

I also have the book Lucky in my Library and will definitely get around to reading it. It’s about this rape. The Mars-Pluto contact has recently been seen in transit in Miss World’s horoscope. Hannah Witheridge is another chart to examine and she had transiting Pluto at the base of a natal yod containing Mars inconjunct Pluto at the time of her attack.

Sebold was finishing her freshman year at Syracuse University when she was raped while walking home through a park off campus. She reported the crime to the police, who remarked that a young woman had once been murdered in the same location. Thus, they told her, she was “lucky.” Sebold returned home to Pennsylvania to live with her family for the summer before beginning her sophomore year at Syracuse. After months of no leads by the police, Sebold spotted her rapist while walking down the sidewalk. He smirked at her and remarked that he knew her “from somewhere” before continuing on. She called the police, who apprehended him. Among her professors at the time was Tess Gallagher, who became one of Sebold’s confidantes. Gallagher accompanied Sebold to several legal proceedings. Also among her professors were Ray Carver, Tobias Wolff and Hayden Carruth. During a lineup, Sebold failed to correctly identify her assailant, as he had brought a friend with him who looked very similar in order to confuse and presumably intimidate Sebold. Finally, he was arrested again and tried for her rape.

After he was convicted, Sebold’s off-campus apartment was broken into and her roommate was raped and Sebold was forced to relive her own trauma. Though no connection to Sebold’s rape case was ever proven, she felt that it was retaliation for her rapist being locked up. Her roommate looked at a photo lineup but ultimately decided not to pursue any further legal action. Sebold has stated that her reason for writing the book was to bring more awareness to rape. “One of the reasons why I wrote it is because tons of people have had similar stories, not exactly the same but similar, and I want the word ‘rape’ to be used easily in conversation. My desire would be that somehow my writing would take a little bit of the taboo or the weirdness of using that word away. No one work is going to accomplish the years of work that need to be done, but it can help.”