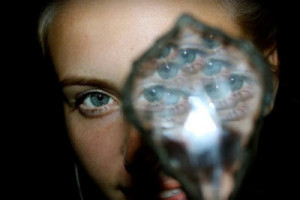 An individual with Mercury sextile Uranus is blessed with possessing both the ‘lower mind’ and ‘higher mind’ in easy connection. Uranian power in the horoscope can create the urge to experiment and it stirs up the desire to seek a connection with the cosmos. It can also signify a soul who receives flashes of insight and intuition, grasping many facts at one time. The contact aids immeasurably the ability to communicate on extraordinary topics and think in a variety of different ways. The aspect gives a quick mind as a jolt of energy is given to the intellectual sphere accounting for those speeded up thoughts. Solutions to problems often strike like lightning and the mind has suddenly jumped forward towards the answer. It also adds an extra buzz and excitement to the mental being.

Mercury sextile Uranus is the cosmically aware thinker, telepathic and inspiring. Ideas are taken from the outer-realm and transported into the daily sphere of the mind where the person will talk or write about progressive insights. With an interest in unusual subjects, thoughts are expressed intensely through an interest in things which are not the norm. The mind plugs into the universal and receives knowledge from a larger domain.

Uranus will do all within its power to initiate the birth of new experiences and realizations opening the door to the future. The individual often perceives things in a different manner and there is an elevated level in which the world is interpreted. Whilst it can feel over simplistic to state the mental perceptions are original, the type does pick up on mental trends heading this way, prophetic in a futuristic sense. It can mean that spacey, unusual or progressive topics interest the person and often it’s a particular interest in one of these areas.

When Mercury makes contact with a ‘higher’ planet it enhances the ability to see the world through life’s patterns. Mercury sextile Uranus is a modern thinker, naturally leaning towards progress, science, and development and with an interest in scientific, electronic, technical, mathematical or musical subjects. Other ‘truth revealing’ interests would be: psychology, astrology, astronomy and the mass media from a humanistic standpoint. Many are attracted to the world of ideas, ideals and the social dynamics of relationships. Mentally there is a cool detachment of the mind, the native is interested in whatever is unique and has an ability to spot previously overlooked truths. The mentality does not think with the status quo, as there is something within that thinks outside the box and looks for the unexpected. The mind hates to be restrained and longs to be free to explore everything electrical and anything which is likely to revolutionize the way the world thinks.

“Think outside the box, collapse the box, and take a fucking sharp knife to it.”