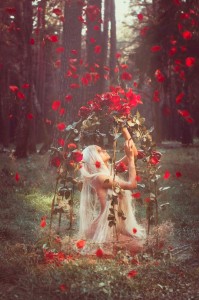 Venusians can be charming, physically attractive and seductive. Venus conjunct the Asc, IC, DC, or MC, signifies a powerful urge to express this planet in life. Angular planets refer to the four corners of the chart, and planets that are conjunct these points are said to exercise a particularly strong influence over the horoscope.

In Mythology, Venus represents the Goddess of Love, named Aphrodite. The Venusian energy in the chart is not the maternal side of femininity, which nurtures and needs to belong with others. On the contrary, Venus seeks pleasure, self-satisfaction and a sense of self-value. Aphrodite doesn’t share herself with anyone and only partners with the gods that she desires. Venus has the power to make anyone, god, or mortal fall in love with her.

Aphrodite can become consumed with erotic longing and desires and she will enchant and seduce a lover with her power of attraction. Venus in a man’s chart signifies his own anima and describes the type of females that he is attracted to and who have that magic ‘pulling power’. It is believed that when a man “projects” the feminine in his psyche (Moon and Venus) onto an actual woman, that woman takes on magnified importance. The archetypal energy makes itself known through infatuation desire or fascination with the woman that matches his astrological type. Sometimes the loss of a relationship is devastating when he loses this vital aspect that has been projected, so whenever we are involved in an extreme love, a fantasy or entanglement, the anima is at work.

Psychologically, Venus represents the need for emotional or material security and the need to feel desired and popular. One of Aphrodite’s extreme characteristics is her vanity, and this makes her highly competitive with other females, she can display jealousy and a certain callousness in her nature. The Goddess named Psyche was condemned to death by Aphrodite when mortals began to speak of a beauty that rivaled that of the goddess herself.

The Greek philosophers hypothesized that there were among six styles of love: The love between best friends, unselfish love, possessive love, practical love, playful love, and romantic love (called eros). In fact, scientist conducted large-scale studies  for the existence of these types of love and found evidence that confirmed it.

Venus rules Taurus and Libra and represents the social aspects of her nature and sensuality. Libra is concerned with harmony, grace and the interplay of opposites. Venus’ rulership of Taurus describes self-worth, beauty and the physical senses. It is often said that Venus signifies a woman’s self-image. The urge for love and relationship is personified by Venus, and the choices we make in love often represent what we value the most. The expression of Venus can be seen in the way that we adorn ourselves, our personal taste and response to beauty.

Angelina Jolie embodies Aphrodite, she has Venus in the 12th house conjunct the Ascendant. Angelina is attractive to others, but may also be unaware of her own beauty and hidden charms with Venus locked up inside the 12th house of her horoscope. Angelina seeks security (Cancer) in relationships (Venus) and needs a sense of emotional belonging, and she could be a gentle, elusive type of romantic, but may show possessiveness towards loved ones. Angelina is vulnerable to rejection and places deep importance on developing close and lasting bonds. With Venus in the 12th house, there is the desire to care for and nurture (Cancer) people who feel rejected or shut-off from society. There is often confusion and uncertainty (12th) regarding the expression of love, self-worth and value. Angelina Jolie might be unsure of the power of her own desirability, beauty and self-worth.

Venus is square to Uranus and this signifies a need for freedom and excitement in relationships and there is often an openness about love with both sexes. A cool and liberated attitude, but if things get a little too boring, she can be a rebellious type of Aphrodite. Venus-Uranus in aspect often signifies sudden changes and disruptions in the love life which can be incredibly painful for this watery Venus. When Venus is in Cancer the needs to feel that one belongs (lunar expression) is powerful; whereas Uranus seeks more unusual relating patterns and values the highest of ideals in relationships. The dark anima that we see in Jolie is indicated by her Moon in Aries opposite Pluto and is obvious in her roles as Maleficent and the monstrous female in Beowulf.

Archetype: The Irresistible Queen and Sorcerer. Shadow: The Spooky Queen and Black Knight. An urge difficult to control, to seize power over other people’s souls and make them dependent. Also one’s own feelings of helplessness towards others who bear emotional power (mother). Extreme emotional states like all or nothing or: if your not with me your against me. Tremendous feelings of jealousy and manic need to control others. Enormous problems in giving the necessary freedom to people one is responsible for. Moon-Pluto By Key Words for Astrology

Pamela Anderson has Venus conjunct her I.C in the zodiacal sign of Leo. Anderson became famous for her part in Baywatch and was chosen as playmate of the month, by Playboy magazine in 1990. Venus in Leo needs dramatic love affairs and often love is perceived as giving meaning to life. There can be a tendency to be in love with an ideal image. Venus in Leo can be generous and playful in romance. Pam’s Venus is square to Neptune, and this frequently archetypes the saviour/martyr complex in relationships and she can attract all types of relationships from criminals, alcoholics, drug dealers and invalids. Aphrodite’s square to Neptune loses the ability to see relationships clearly. Pamela’s ex-husband Tommy Lee has been accused of beating Pamela in their marriage.

The fantasy element of Neptune is powerful in her horoscope. Pamela is worshipped by millions of men worldwide and was one of their favourite pin-up’s. Venus-Neptune relates to others compassionately, and on the positive side they are attracted to musicians, artists, dreamer, always searching for a soulmate.

This a combination to associate with romantic idealism and fairy tale romance withe capacity to seduce and be seduced. A longing for the unobtainable, and an ability to believe in the best of the other person, can lead to gullibility and difficulty facing the reality of the beloved’s imperfections…or be attracted to the weak or vulnerable themselves; someone they can feel sorry for. By The Contemporary Astrologer’s Handbook (Astrology Now)

Glenn Close has Venus conjunct the descendant in Aquarius opposite Pluto. Glenn is most famous for her role as Alex Forrest in Fatal (Pluto) Attraction (Venus). The story is about a successful editor who has an affair with a married man. However, Alex’s mental instability makes it extremely difficult for her to end the relationship with her lover, and she becomes obsessed (Pluto) and even tries to kill her rival (his wife). It is interesting that Glenn Close was chosen to play the role of the stalking Aphrodite!

Venus-Pluto can represent a kind of intensity that tries to force love on others and the aspect can alternate between extremes and can be possessive, smothering, jealous and the relationship may have a ‘Till death do us part’ embodiment. Venus-Pluto also finds it difficult to forgive a lover when betrayed. And their intensity can often be overwhelming to more detached types. Venus in Aquarius is friendly in love and enjoys social connections.Glenn Close has also played evil lady villain, Cruella De Vil, and the revengeful Marquise de Merteuil, in Dangerous Liaisons.

Venus-Pluto, particularity the hard aspects, may engage in unconscious sabotage of a much valued relationship. But this usually occurs because this is a big chunk of primitive emotion knocking around in the basement, and therefore the conscious fear of losing control (which constitutes a threat to survival. By The Inner Planets: Building Blocks of Personal Reality (Seminars in Psychological Astrology)

Marilyn Monroe has Venus in Taurus conjunct the M.C and this placement represents our vocation. It is often how the public ‘views us‘. Venus trines Neptune in the 1st house and she was the physical embodiment of men’s fantasies and was seen as highly desirable. The sensual (Taurus) beauty and idealism in relationships is a strong feature in her horoscope. You can see some of Aphrodite’s expression through these women’s horoscopes.

Venus trine Neptune can “easily” forgive the flaws in a partner, and is prone to being gullible. Blinded by illusions, and possessing a boundless amount of tolerance along with the ability to infuse daily life with a gentle splendour. In addition, the individual is capable of illuminating the magic of romance, and effortlessly displays how to give and receive love completely. Venus Trine Neptune

The Librian aspect of Venus reveals not only aesthetic beauty, but Aphrodite is also intellectual and uses her strategic skills to get what she desires and this can be through self-adornment or the clever and articulate use of charm. Venus in her negative expression signifies vanity, self-absorption, laziness and so forth. However, to get away with it, she is often charming to a fault! An interesting observation is observing that three of these pin-ups have a Venus-Neptune-twelfth-house connection.