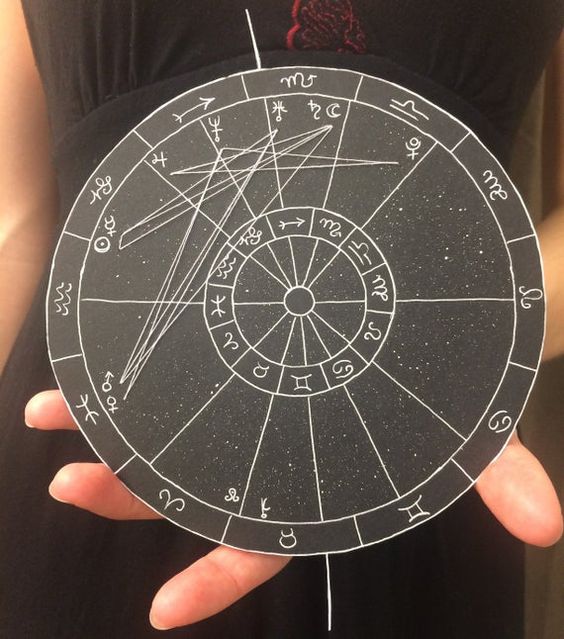 In astrology, there’s an idea concerning the degrees of the planets manifesting at a particular age. Some people report significant events, and others do not correlate anything significant in their lives. So, at the age of twenty-five, and this being the actual degree of my Venus in Capricorn in the 5th house, I met my long-term partner and fell pregnant. The relationship occurred when the progressed ascendant trined my natal Venus. So there could be a tiny bit of truth. The only drawback to the astrological degrees forecasting life events is that all of the degree-wise events will happen before thirty years of age. The chart is 360°, and the 12 zodiac signs are 30° each. With this theory, the Sun in the horoscope has been singled out as being the major age significator for a powerful life event occurring. Now, I personally can’t remember what happened at the age of eight (Sun at 8 degrees Pisces), but some individuals do have something important in life happening at the age of the solar degree. An example of this occurring is revealed in The 7 Secrets of Synchronicity: Your Guide to Finding Meaning in Signs Big and Small:

If your Sun is positioned at, say, 25 degrees of your sign, you might meet your spouse at age twenty-five or your first child may be born. A-Sun at 8 degrees could mean your parents divorced when you were eight years old, or you were admitted to a gifted program in third grade that influenced the rest of your education. In Reya’s birth chart, the Sun is at 24 degrees and 58 minutes of Aquarius (two minutes short of 25 degrees). When Trish first looked at her chart, she asked Reya what life sculpting event happened to her between the ages of twenty-five and twenty-six. Just twelve days before her twenty-sixth birthday, Reya “was hit by a train and was unconscious for four days. That event took me out of a very destructive lifestyle into my first foray with alternative medicine,” she wrote. “Could that be it?” You bet. …If you were born on October 14, 1950, for example, your Sun would be in 20 degrees of Libra. This means there may have been a defining moment in your life when you were around twenty years old. Give it six months or so on either side. If you’re not yet at that age that corresponds with the degree of your natal Sun, keep in mind that some defining event may happen when you reach that age.

Other astrological studies on degrees have some interesting findings correlating with a natal chart. As stated previously, I have the Sun in Pisces at 8 degrees and hopefully, it just slides out of Carol Rushman’s interpretation. The writer reveals that people who have 7 degrees prominent in Virgo or Pisces can be promiscuous, further noting that when a planet stations at that degree in either sign people start illicit love affairs. Also, observing 24 degrees of Cancer to be an astrologer’s degree. The author considers critical degrees as triggers for a crisis. Cardinal 0, 13, or 26, Fixed 8-9, 21-22, Mutable 4, 17, and 0 and 29 of any Modality.  Apparently, it tends to make situations incredibly intense in these crucial degree areas.

C.E.O Carter’s An Encyclopedia of Psychological Astrology is based on some degree work. Carter lists degrees for those associated with astrology as being around 27 Leo-Aquarius. Also, 11 degrees Virgo-Pisces are important. I have Saturn rising in Virgo at 10 degrees and 42 minutes. Liz Greene, one of the most popular psychology astrologers, has the Sun in Virgo at 11 degrees. In studies for Cardinal Signs: 5-degree planets in Aries-Libra may show cruelty, homicidal tendency. 7 degrees Capricorn gives great speaking ability. Immoral souls have 8 degrees Aries-Libra. 8 degrees Cancer-Capricorn is for paralysis. 11 degrees Cancer for Alcoholism. 15 degrees cardinals are the suicides. 22 degrees Libra for artistic ability. 24 degrees of the cardinals for music ability. Fixed Signs: Planets at the beginning of Aquarius for obesity. 6 degrees Scorpio for a love of the sea. 9 degrees fixed signs for alcoholism. 16 degrees Taurus for homicidal tendency. 20-25 degrees of the fixed signs for homicidal tendencies. 25 degrees of the Fixed for alcoholism or suicide. Mutable Signs: 6-degrees Gemini-Sagittarius for morbid fears. 9 degrees mutable for homicidal tendency. 22 mutable for insanity (I have my Moon on an insane degree!) and 26 degrees mutable for suicide.

Charles Carter also says this about the degrees in the natal chart:

No attempt is given for reasons for the connection between these areas and certain effects, nor can you always understand why the same area should produce apparently quite unrelated results. Our knowledge of the influences is still empirical and is only in the earliest stage from even that point of view. Future research may explain the basis of these facts.

In the Plain Vanilla Astrologer, Pat Geisler explores the weakening effect of a planet found at the 29th degree. This degree I’ve personally found heightened the sign’s qualities rather than weakened. The author points out that this critical degree could possibly signify health problems, financial difficulties, mental instability, being unwed (Sun), weak parenting skills, hampered emotional development, difficulties in childbearing (Moon), losing interest in sex, actively disliking music (Venus), and so forth. Personally I disagree with a large portion of this interpretation. But I include all astrological observations on degrees for others to study and come to their own conclusions.

What I think it means is that such people have major shifts that happen in their lifetimes in the areas ruled by those planets in those last degrees. I think the 29th degree always points to an element of difficulty. The 29th degree is a degree of being “worn out” or sometimes shows a planet there lacking in ability to manifest smoothly. It can show difficulties in functioning in the normal way. There can be dramatic climbs to the top and sudden falls. It’s as if the 29th degree is the straw of the old and the individual looks forward to the new sign and planets which often express something new from the oncoming sign far more openly than the previous one. Let’s start with the Sun. In a man’s chart it is his identity, his career and his health. The 29th degree shows at some point there will be a major decision which will alter his career path. It will not be merely a new job but a whole new direction and an actual change of career. It may also imply poor decision making. Or poor timing. It’s a good idea to think of the beginning of the sign as the strongest area of it – or the place where its qualities manifest the most purely. Any planet at the 29th degree in my opinion acts weakly in terms of the sign’s qualities and presents the chart with a fuzzy image of that area of life or the people it represents. Example: Women with Suns in 29 degrees plus minutes often marry men who mean well but who are – in some way – somewhat ineffectual. They may have trouble keeping a good job, or their parenting skills are non existent, or they are born followers, or too passive, or have emotional problems or something. Maybe they just can’t manage money and screw up the budget until you take it away from them, but they lack something noticeably. I mentioned that women with the Sun in 29th degree may have passive or ineffectual husbands. I used those terms as examples of possible problems – not the only ones. I would not have wanted the man Rose Kennedy married no matter how rich and powerful he was – he was apparently not a very nice man and made her life miserable, according to stories written about him. Her Sun was in 29 degrees…There are a surprising number of famous people with 29 degree Suns. Actress Goldie Hawn’s “husband” isn’t. She and Kurt Russel have yet to formalize a life situation of many years that leaves all their grown children technically bastards. And yes, I know – it’s fashionable nowadays to have children out of wedlock, but who doesn’t love who enough in these deals?”