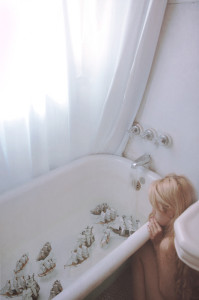 The Lovely Bones is the story of a teenage girl who, after being raped and murdered watches from Heaven as her family and friends struggle to come to terms with her death. The film is based on the novel by Alice Sebold, and apparently the book is much grittier than the director’s version and some have complained that the director of the movie, Peter Jackson, failed to stay too long on the more horrific aspects of her death.

I liked the movie and the depiction of heaven was gorgeous. Lead actress, Saoirse Ronan, was born under the Uranus-Neptune conjunction in Capricorn along with other rising stars such as Dakota Fanning and Justin Beiber. The young star also has Mars in Pisces trine Pluto in Scorpio which describes sensitivity and strength combined with powerful emotional depth, and this is often evidenced in her movie. The easy aspect between these two planets aid strength and will-power in challenging situations.

Anyone with children can imagine the traumatic experience of losing a child in this manner. I think it is the worst imaginable thing to happen, and no parent should ever lose a child. Similar to this story is the one of Molly Bish, she was a 16-year-old girl that was abducted and murdered while working as a lifeguard. The day before her abduction, her mother claimed that she saw a man in a white sedan in the parking lot of the beach where her daughter was positioned.

It is believed that Molly’s killer had tricked her into believing he needed help and when she approached him, she was abducted. Natally, Molly has Mars square a Saturn-Pluto conjunction a tough and potentially malefic and violent combination in the horoscope.

“The Mars Saturn contact has long been associated with violence, either given or received, and whilst not the usual manifestation, it is by no means uncommon. “
“People with tight hard aspects (Mars-Pluto), and not uncommonly the conjunction will often themselves have had a history of physical violence, cruelty or sexual abuse.” By Sue Tompkins, Aspects in Astrology

The hardest part of the movie is watching Susie’s murder and her family eating dinner and piling extra vegetables on Susie’s plate as punishment for being late. I sat there thinking – this is the last time they will laugh like that as a family before their whole world is changed forever.

Astrology and the movies Pluto