February 29, 2012 by astrologyplace No Comments 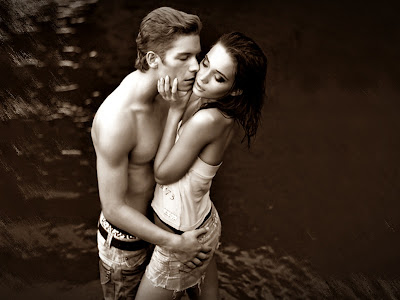 This article discusses Sun conjunct Neptune, Sun Square Neptune, Sun Opposite Neptune and Sun Trine Neptune aspects in Synastry. Sun-Neptune contacts often show a great sensitivity towards one another and it is a fantastic romantic contact to have, but there are impossible expectations.

The aspect can encourage dependency and an unrealistic idealisation of the other, they may be unable to see the partner clearly. As with all Neptune contacts in synastry, there is a higher and lower road to swim. Neptune relationships sometimes lead to an avoidance of issues, but there is a spiritual centre here and sensitive attunement to one another that finds it difficult to let the real world intrude.

Neptune contacts between two charts can reach the sublime and spiritual to the confusing and chaotic. There are many misunderstandings that may occur through this interaction, so unless the relationship has some self-control the negative side of Neptune may wade in and illuminate any weaknesses, deceptive behaviour, and dependency problems.

With both the easy and hard aspects, there is often a lot of flowing feelings of love between them both. Neptune admires the Sun and depends on their warmth and strength, but can try too hard to please. The Sun person may take on the role of the strong one, guiding, leading, protecting and supporting the Neptune individual. To keep hold of the relationship Neptune can become needy, ill, have problems with drugs or alcohol, feel victimised, and addicted. The Sun person then feels a sense of obligation towards Neptune and the great insecurity of the Neptune individual clings like a parasite to the Sun.

There can be dramas between these two that feature any or several forms of martyrdom. If you happen to be interacting in an emotional harmful way the hard aspects (conjunction, Square and Opposition) are highly charged and tend to be more compulsive in relationships. There can be a life-long longing from the Neptune person towards the Sun person in this interaction. The Neptune person will often feel this is the creature they have dreamed of and that they have found someone who is their soul-mate. However, this longing for the other can turn into neediness, and the individual becomes central to his life. It can become difficult when one (Sun) feels that they are at the centre of the other’s (Neptune) happiness.

The Sun trine Neptune aspects show an easy sense of mutual sensitivity, understanding, and dreamy interaction. There is a sense of a soul-connection, and, of course, the harder aspects will also fall under Neptune’s dreamy enchantment, but there is more caution given for the vulnerability of the relationship. Neptune trines in relationships help each other tune into one another’s feelings with ease. However, with harder contacts this tuning in can sometimes lead to confusing signals and there can also be an excess of compassion and in some cases – pity.

Fantasy and illusion are built around this interaction. Neptune represents an unattainable quality. The Neptune person can be pretty hard to work out at times. Neptune to the Sun may represent an addictive relationship, and there is a psychic feeling between these two like they have met before and are bound together by some mysterious tie. This is even more acutely felt with Sun conjunct Neptune in synastry.

“This is a bit like Sunshine sparkling on and off the surface of water. But come nightfall there can be just a dull grey limpid mass – that is, sooner or later the mirage evaporates and the real vulnerable person remains.”

This may be a relationship where both of you seek escape in one another. Sometimes there is deception because the Neptune person has a tendency to avoid confrontation and is sometimes less direct. This may be perceived as nebulous behaviour by the other. If the issues are worked through there is real chance for this relationship to maintain its compassion and deep understanding of one another.

Mars-Saturn Synastry
Those with Mars-Saturn contacts in synastry may have the most difficult of all the relationship aspects to deal with. These planets are considered the bad guys in traditional astrology. However thes...
Moon-Saturn Synastry
Those with Moon-Saturn aspects in synastry show feelings of deep responsibility for one another.  The Saturn person offers the Moon physical containment and strength but may be overly critic...
Moon-Uranus in Synastry
With Moon-Uranus in synastry, there is a wild, crazy, unpredictable element connected to their interaction. No matter how emotionally steady each of them is outside of this connection, there is s...
Saturn in Synastry: The Real Deal
The role Saturn plays in relationships is highly significant for both its strengths and weaknesses. In many cases, a relationship either builds in strength or crumbles depending on the couple's ...
Sun-Pluto in Synastry
Sun-Pluto contacts in synastry may show compulsive interactions, sexual tensions, and possibly jealousy and possessiveness. The Sun is drawn by Pluto's depth and this kind of relationship often ha...
Jupiter in Synastry
Jupiter in synastry can describe bonds which inspire feelings of mutual generosity and a capacity to find joy. The Jupiter person by way of interaction can make the other feel optimistic, brighter, an...