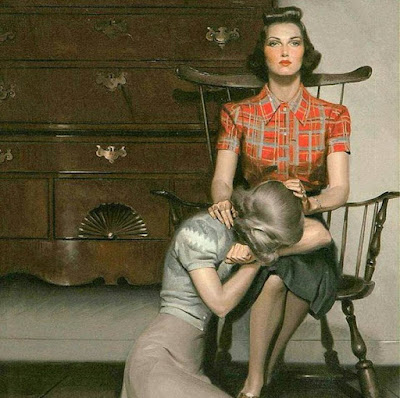 Virgo’s critical eye, analytic ability and discovering the deepest reaches of understanding how each part functions, is always breaking up the whole to discover the nature and functioning of the interrelating parts with the sharpness of the mind.
On the other hand, Pisces, its opposite, reveals the artistic, intuitive, and musical, and envisions the whole. The Virgo-Pisces axis is like looking at a mosaic, study the whole and the parts disappear. Study the parts and the whole disappears. Pisces has an overall intuitive grasp on the meaning of life, and this could be challenged as being simply intuitive grasping, a generally weak and vague perception, containing hazy generalizations. In contrast, Virgo’s analytic, introspective, detailed, and logical approach to problem solving is unmatched, but they tend to not see the whole picture.

The over-analytical method can sometimes kill the love we have for something creative, artistic, and inspiring. In the Piscean sense, it is often better to be accepting, intuitive, emotional and subjective than be disturbed by the intellect. Virgo rules the intense distillation, skill and technique, useful and applicable and the learned craft. They involve themselves in a labour of love, evaluating the effectiveness of something and to get things just right it often involves a lot of practice. The overly critical eye eats away at creativity and when its operating like this all of the time – art can lose all meaning. Yet, the discriminating eye is a tool that can be used to effectively improve on something. The Virgo and Pisces axis possesses the ability to work systematically, mastering art, and bringing the joy of craft into the realm of the unconscious offering something to the collective that is both practical and meaningful.

The opposition in the horoscope doesn’t have to be a tug of war, or grossly lopsided, and it can be a collaborative and open exchange, and it is really about embracing each sign and equally understanding that two sides can co-exist. For example, Virgo people can be problem solvers, preferring on working on a solution that is workable. Pisces sometimes has too much emphasis on hurting others people’s feelings which tends to cloud one’s thinking making it difficult to find the optimal solution. The best decisions are made by marrying the two ways of thinking,

In life, Virgo is intelligent, ingenious and shows an aptitude for deeper subjects. Whereas Pisces understanding resides in a knowing that transcends the intellect alone, a knowing that stretches far beyond any one of us, and a knowing that cannot be put into words. The imagination beyond the known and mundane is where the fishes find its refuge. Pisces concepts are usually too large for the Virgoan to digest, and the intellect is incapable of deciphering something that is more understood by the unconscious. For this reason, Pisces can never decide on one direction because there are so many paths, usually the Virgoan takes training in order to do something particular and is completely focused, and less clouded and more practical.

Virgo has more boundaries in place than Pisces and a self that can keep its longings in check. Pisces is more of a mystifying creature and is boundary-less sponging up the whole room of energy. It can leave Pisces water-logged, emotional heavy and very sad when the energy is negative. Whereas Virgo can cope well with separateness and has a filtering system keeping a sense of self at all times while also being helpful.

A unified use of the axis can involve things like art and craft, film editing, immersing the self into something, but also keeping a critical eye. The axis can include people that have the ability to weave artistic expression with a critical mind. The Virgo-Pisces polarity rules the actualization of dreams and making them into a reality. We could meet the artist and the scientist, one that possesses the talent to apprehend the grand picture, and a real attempt is made to put their art, imagination and intuitive gifts to practical use.

The earth/water pole is a finely tuned vessel of service taking the imagining quality and applying the finer details in one breathtaking scope that is also ordered and intricate close up. The Virgo meets floaty Pisces walking as a mystic with their feet firmly on the ground. They take the dreamy heights of the intuitive mind and implement this vision into practical service. Those with this axis powerful or with an emphasis of planets in Virgo/Pisces in the chart show a deep kindness and helpfulness, sentimental nature, but also understanding.

Wholeness does not always mean perfection if one loses sight of the ground beneath their feet and is completely swept up in the Dreamscape, and cannot cope with the mechanics of living in the daily world, and it becomes meaningless. Equally, only seeing practical results and using logic means nothing if one cannot see the inner spiritual side of life at work. Within opposite signs, there is an intrinsic wholeness and the opposition mate acts as an undertow and shadow side to the other and often peeks out of the personality, particularly in times of stress. Pisces is the sign of disintegration and Virgo integration, and it is also the fusing of a revelation with complete mental clarity.